Returning home from an errand this morning, I drove slowly, due to low visibility. I noticed the fog coating the nearby cemetery and turned in. 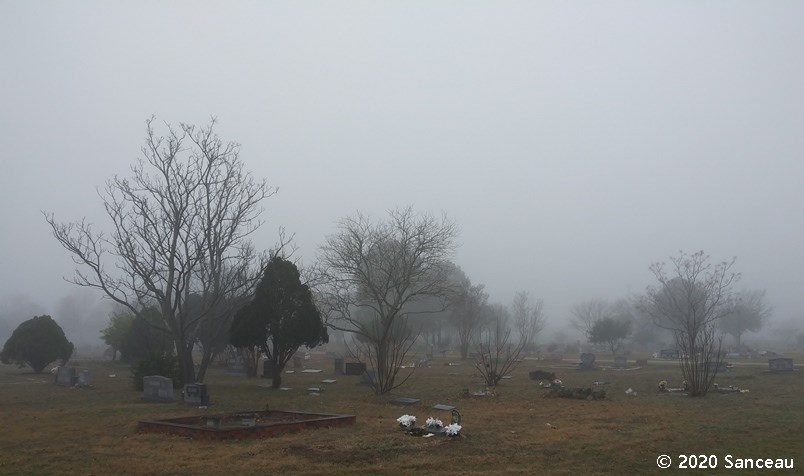 I saw wreaths in the trees and wreaths by the gravestones. 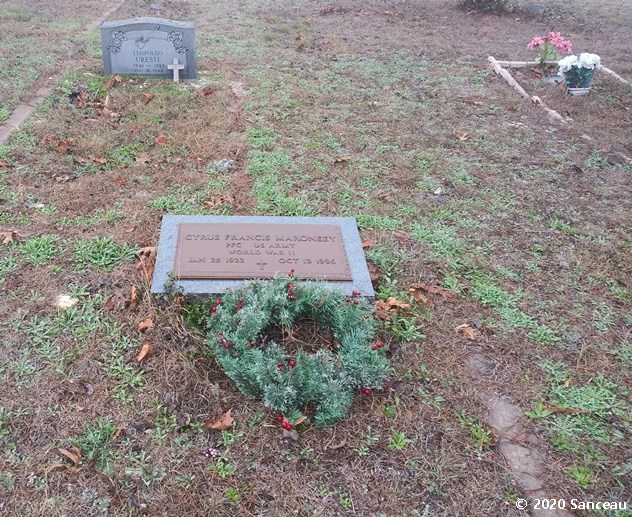 Statues of Jesus and the Virgin Mary.

Heartbreaking resting places for little ones.

Uplifting seasonal signs for others.

And a stillness that shrouded it all.

A woman sits, perhaps speculating about the three maidens who hurled themselves down into the river below, after hearing word that their lovers were lost in the Crusades.

A fellow WordPress blogger was able to take a more current shot.

It reminds me of the Randy Travis song, “Three Wooden Crosses.” It always hurts my heart to see crosses on the side of the highway. Lives lost, people missed.

I received word that my granddad passed away this morning at the age of 94. Many moons ago, he, like many in The Greatest Generation, fought in WWII, so that you and I could have the freedom we enjoy. But more than a soldier, he was a good father and grandfather.

He enjoyed hearing my son play the piano.

And even shooting pool with him last August. 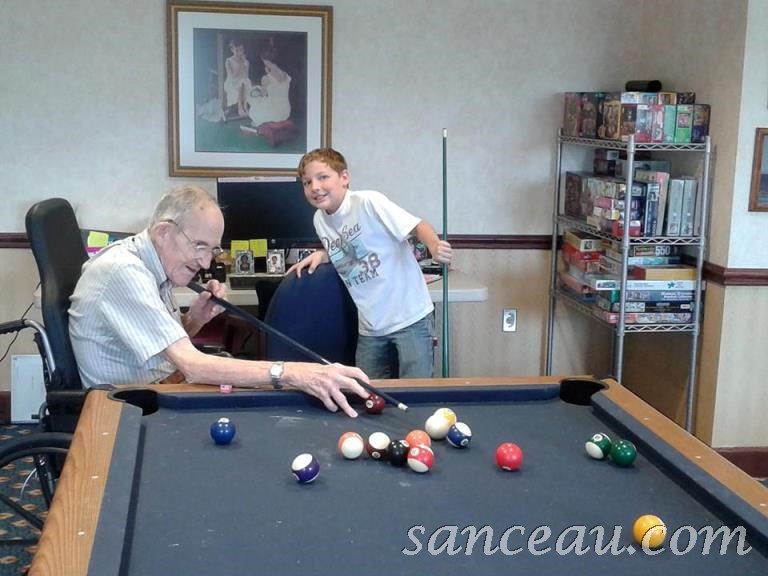 Recently deceased Lauren Bacall is listed in the #40 spot on www.deathlist.net, a site that lists its picks for “most likely to pass” celebrities each year. A skull and crossbones beside her name denotes its accuracy. Fortunately, it is a UK site, so America has nothing for which to apologize on that count. Finally.

Dr. Feelgood musician, Wilko Johnson, claims the top spot; although just 67 years old, he is terminally ill with pancreatic cancer. He asserted, “Man, it makes you feel alive to be told that you’re going to die. How many years ago did I last feel like that? The ecstasy of youth, the joy of existence. I have felt like that again.” Fortunately for him, over a year has passed since then.

It is a morbid site, indeed, but not any more disturbing than say The Dark Knight, which I found wholly sinister and unwatchable. One hopes that money is not being placed on these bets. The very nature of mortality reveals that yes, high-ranking Billy Graham (96), and Zsa Zsa Gabor, a year older, will probably not be here ten years from now. But then again, film actress Luise Rainer is 104 years old and very much alive. Lest you think her a once-passing starlet, she was the first actor to win multiple Academy Awards and the first person to win them consecutively. In addition, she was married to playwright Clifford Odets. So there.

And one more thing. Per the above listed site, when Louis B. Mayer threatened to blacklist her, she predicted she would outlast him. “You are now 60 and I am 20,” she told the astonished mogul. “When I am 40, the age of a successful actress, you will be dead and I will live!” These words ended her career in Hollywood, and, returning to the theater, she even used her Oscar statuette as a doorstop. He died when she was 47.

On the list, you will find Fidel Castro, who should have died years ago, but when you make a pact with the devil, who can determine longevity?

Others, like Al Molinaro from Happy Days, you wish would live forever. In any event, I do.

Just look at that proboscis to rival Durante! You remember Al Delvecchio, don’t you? Maybe you can stay up late and watch Nick at Nite to catch some episodes. He played the endearing owner of Arnold’s on Happy Days. But his first sitcom was as Murray the Cop on The Odd Couple in 1970, when he was already 51 years old.

He said, “I spent twenty years here before I got anything going, and from that I got lucky. It takes a lot of luck in show business. You’ve just got to be lucky and in the right place at the right time.” They’ve had him deathlisted for ten years now, and he’s still going strong. And I, for one, hope he gets another ten. Yep, yep, yep, yep.

My friend, Debbie, passed away yesterday from cancer, but this is how I choose to remember her–dancing in red capris.  She is in heaven now, and we will lay her body to rest tomorrow.  Goodbye, Debbie.