With its clubs and other activities, the USO not only served the needs of America’s men and women in uniform, bu also provided an effective means of channeling civilian volunteer efforts. By the war’s end in 1945, over 1.5 million Americans had contributed  their time to the USO. —  Always Home:50 Years of the USO

It felt good to provide a service to those who served in the war. These Navymen are enjoying coffee and doughnuts at the San Francisco USO. 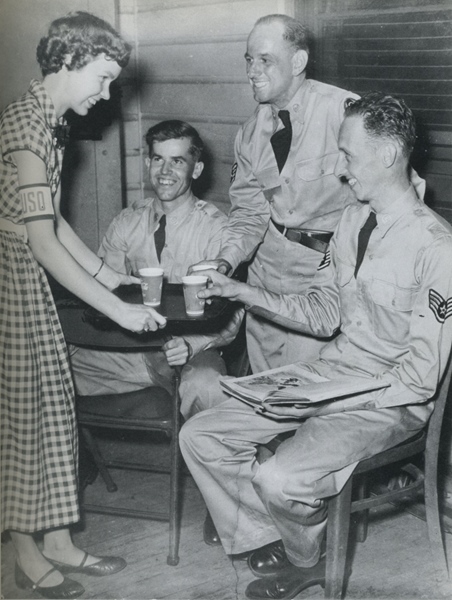 Pictured above, Mrs. Alfred Scott serves punch to a soldier in July 1943 at the Phyllis Wheatley YWCA USO.

The USO (United Service Organization) was formed 75 years ago, in February of 1941, a full ten months before the USA entered WWII. Under the shadow of Nazi aggression, the US government instated the first peacetime draft in its history. Mobilizing thousands of young men, most of whom had never left the country, proved daunting. President Franklin D. Roosevelt wanted a way to keep servicemen in touch with civilian life. Six organizations–the YMCA, the YWCA, National Catholic Community Board, National Jewish Welfare Board, the Travelers’ Aid Association, and Salvation Army–pooled their resources to form the USO.

Roosevelt insisted that these organizations handle the on-leave recreation of these men. On February 4, 1941, the USO was incorporated in New York State. Under the leadership of Chairman Thomas Dewey (yes, THAT Dewey), by the end of the year, they had raised $16 million. In 1942, Dewey ran for governor of New York, and was replaced by Prescott Bush, the father of Bush 41. He contributed greatly to the organization, and soon USO centers dotted the country at bus and railroad terminals as well as training centers.

Sometimes a smile and hot meal were enough to make a soldier feel appreciated.

This image from a USO on the French Riviera lists many of the services offered to men in the armed forces. 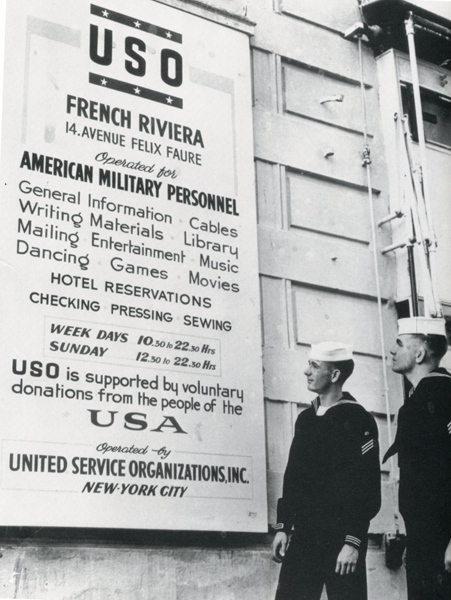 Stay tuned for the next installment of this USO series. I can’t wait to share the images!

What better place to meet your new beau than at the laundromat, when you’re wearing your last-ditch threads and macrame vests while your good clothes toss around in suds? These girls discovered a fun-sized satin-jacket-clad boy emerging from the bowels of a Huebsch dryer. Bonus: he could very nearly fit into the laundry basket! Score!

I don’t know about you, but when I eat ravioli, I don my Italian sombrero and play a round of Italian music with my maracas. 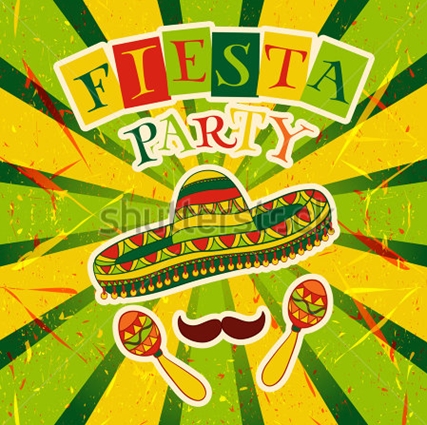 Come on. White men can jump would have been too easy. I dated a guy in college who was very proud of his vertical; he could high-five popcorn ceilings like nobody’s business. But he had nothing on this coach, who seems to have jumped up to groin level with the nearby player. Assistant varsity coach Bill Henneberry looks about 20 years old, not much older than the students at San Francisco’s Sacred Heart High School. And that’s part of why he made it happen.

If you’re between 17 and 30 and in a somewhat fitter than average population, here are some numbers to shoot for.

Meanwhile, Michael Jordan had a reported 48″ vertical, but that’s still short of the amazing Kadour Ziani, the world record holder at 60″ vertical (though a lot of places say 56″).

Now maybe you’re not fit or between 17 and 30, but coach Henneberry was. Just look at this lift.

That’s some enthusiasm over blocking an extra point kick.

Actually, it was during this very year of 1955 that Coca-Cola expanded its packaging from the standard 6.5-ounce contour bottle to include 10-, 12- and 26-ounce contour bottles in the U.S., giving consumers packaging options to meet their needs. My need for a Coke would never be 6.5. That’s like going to a Mexican restaurant and eating one chip with salsa.

This pinterest pic is trying to make the point that Coke adds belly fat.

I drink Coke. I have belly fat. But I also have no discipline and an overpowering sweet tooth, coupled with an inability to disobey Sprite Boy (who was only used in Coke ads,  and had been discontinued by the time Sprite came on the market in 1961).

So guess what? I’m taking some home today.

Here they are, goofing around on I Love Melvin…

…and 50 years later at the anniversary of the movie, with Rita Moreno and Cyd Charisse. 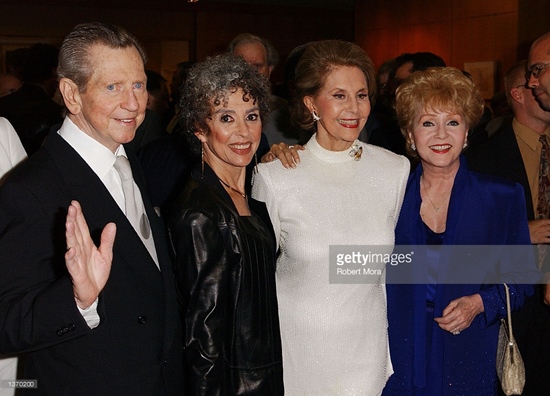 According to gorillafilmonline.com, the grip is the person in charge of setting up equipment to support the camera, and on some sets, support lighting equipment (but not the actual lights. Never touch the actual lights). It’s a physically demanding job where experience is invaluable.

The grips set up all the rigging which allow the camera to move about within a set in a way that captures the shot as the director wants it, so this can involve working on camera dollies, cranes, tracks and other camera setups. When a grip does his job well, the camera movement through the scenes will be seamless, so much so that you don’t even think about it, meaning you don’t think about the grips.

The grips below are moving a camera dolly onto a track. I hope they have a chiropractor on set. Or at least a masseuse and a couple ice packs.

Reelrundown.com states that the term “grip ” dates from the days of silent movies when cameras were hand-cranked. The cranking action would make the camera wobble, and so the camera operator would call for anyone with a “good grip” to grab the camera tripod legs and physically steady the camera. 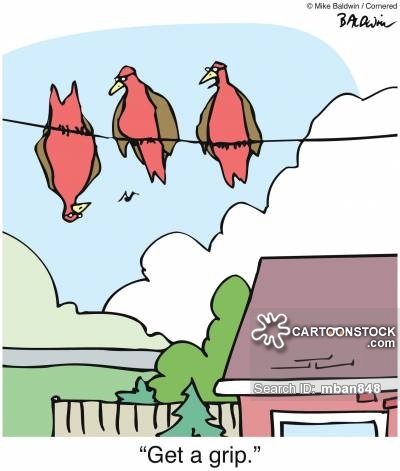