Among my granddad’s endless child-of-the-Depression-era keepsakes (honestly, I should start a blog just called THAT, since it could last into the next century), was this signed (pawmenship, not penmanship) image of Rin Tin Tin himself. Does he look focused or forlorn? They really should have posed him looking up. In any event, he died the next year in 1932. Other RTT’s succeeded him, but he was the legit and only German Shepherd rescued from a World War I battlefield.

Far be it for Ken–L-Ration not to send advertising and pimp their products to young kids (like my gramps) who sent off for them. After all, it’s what Rin Tin Tin ate. 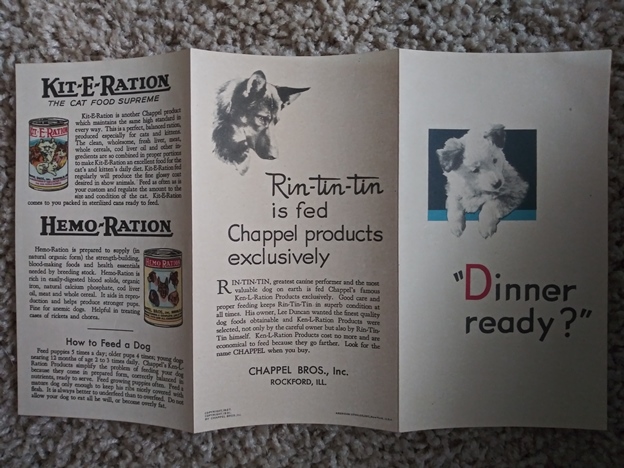 Archibald Leach would have been 114 today. Ain’t he a kick in the head?

According to gorillafilmonline.com, the grip is the person in charge of setting up equipment to support the camera, and on some sets, support lighting equipment (but not the actual lights. Never touch the actual lights). It’s a physically demanding job where experience is invaluable.

The grips set up all the rigging which allow the camera to move about within a set in a way that captures the shot as the director wants it, so this can involve working on camera dollies, cranes, tracks and other camera setups. When a grip does his job well, the camera movement through the scenes will be seamless, so much so that you don’t even think about it, meaning you don’t think about the grips.

The grips below are moving a camera dolly onto a track. I hope they have a chiropractor on set. Or at least a masseuse and a couple ice packs.

Reelrundown.com states that the term “grip ” dates from the days of silent movies when cameras were hand-cranked. The cranking action would make the camera wobble, and so the camera operator would call for anyone with a “good grip” to grab the camera tripod legs and physically steady the camera.

Can 30 years have already passed since the release of The Breakfast Club? Star Molly Ringwald is working the morning talk show circuit today, but where is the boy she winds up kissing at the end? Don’t you forget about him, Molly.

Now, now, I’m just having fun with the Oscar-winning actor, who used to perform as a child magician under the name The Amazing Adrien. Just think how odd he’d look if he didn’t have such an obtrusive appendage. 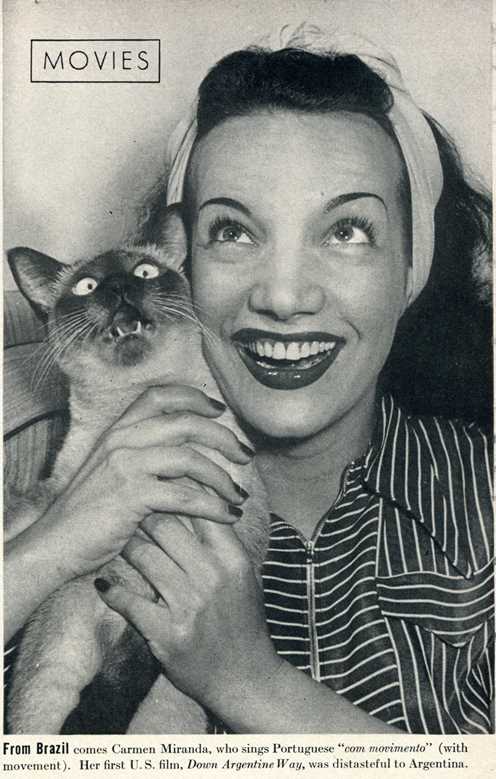 To be fair, all cats hate you. The contempt is thinly-veiled. For those of you unfamiliar with the wide-eyed Brazil nut pictured here, it’s Carmen Miranda, aka The Chiquita Banana Lady. And wide-eyed she was!

She may have danced her way to fame with a pile of fruit atop her head, much to the chagrin of Latin nations who felt stereotyped, but she had the last laugh. By 1945, she earned more than $200,000 (over $2 million in today’s money), becoming Hollywood’s highest-paid entertainer.

She must have had fabulous posture and core control to forever be balancing colorful edible headgear and bearing the burden of 27 lbs of heavy metal accessories. No pain, no gain.

In August of 1955, Miranda was shooting a a song and dance number for the The Jimmy Durante Show when she fell to one knee. Out of breath, she finished the segment and went home. The next morning, Miranda died from a heart attack at her home in Beverly Hills. She was only 46.

To see her sing and samba, catch this 1943 clip of her in “The Lady in the Tutti-Frutti Hat.”