She may look sweet now…

Mercy here was bold enough to enter (and win) a jalapeno-eating contest, and the Mickey Gilley lookalike appears only too happy to judge. 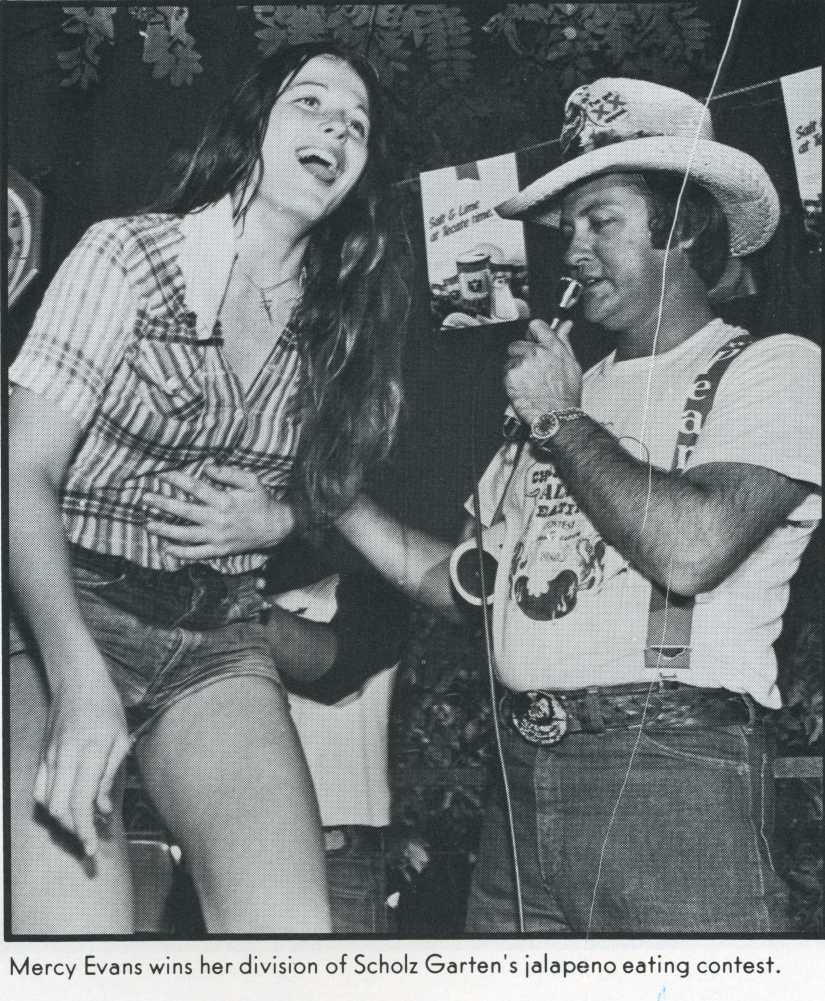 Now she has some pocket money to put in these cowboy’s change cups.

Or maybe this dude’s more her style, in his Urban Cowboy Chic.

Either way, dancing is on the agenda. 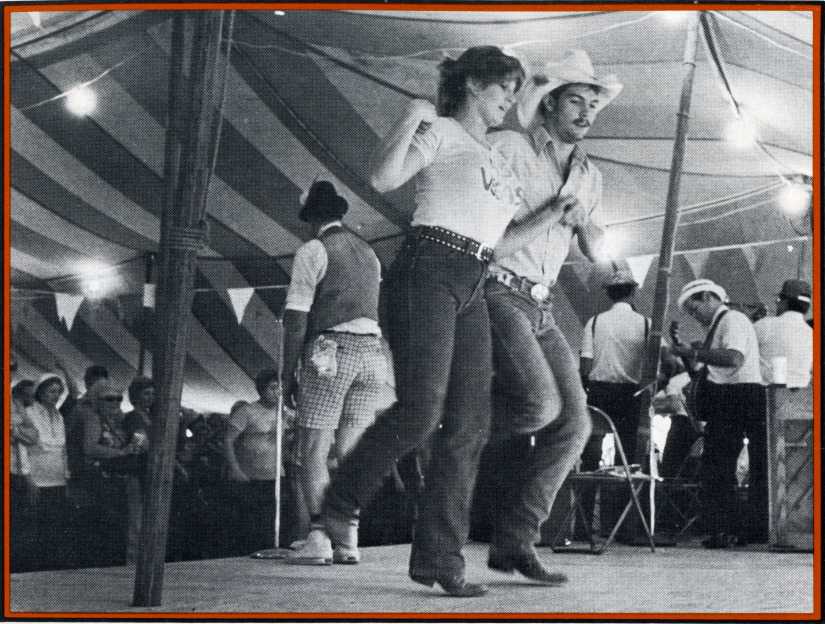 Just don’t take it too far. Bikini bull-riding is no fun when you’re tipsy.

What is this? Animal House meets the Village People? No, maybe not the Village People. Although they sang “In The Navy,” I doubt these Navy ROTC Midshipmen spun a lot of VP on their turntables. Check them out in their weapons and combat gear. This is where I make an obscure reference to Howard Jones in the way way back (the tall, Aryan one), but perhaps that’s more a Pandoran influence than reality. Anyway, I think we can all agree who the alpha male is here, in this portrait of masculinity. It’s knee socks guy. You know it is. The posture, the marriage of vest and tie and ripped daisy dukes, the sassy confidence. Damn, it feels good to be a gangster. Seriously no Low T here.

Don’t know what “Low T” is? Why the heck not? The TV is riddled with commercials about Low Testosterone, alternating between those hormone replacement commercials, where longhaired women in their sixties confess how happy their husbands are that “my libido is back.” Your grandparents didn’t have to worry about this stuff, right? My grandparents spent more time absorbed in Readers Digests than they did at the corner Walgreen’s, refilling prescriptions for afflictions they were too ignorant to know they had. BECAUSE THEY HADN”T BEEN INVENTED BY BIG PHARMA YET. Complaints were limited to arthritis, goiter, and bursitis. But not today’s society.

Let’s not. Who cares about your Low T? You’re not getting any action regardless, pajama boy. I bet that’s herbal tea in that mug. Yeah, I have heard about the lonesome loser. It’s you. Dang, just when I thought my libido was back, you had to send it away. Curses!

Just think, somewhere out there, hundreds if not thousands of pharmaceutical company employees are getting paid to brainstorm up some fake diseases to prey on our fears and our wallets. Did you know my gums are receding? Perhaps that’s blog-induced bruxism (BIB)? And just like diabetes, there are two categories:

You, too, may have BIB. Where’s the pill for that? Oh, they’re working on it?

Check out this sexy, windblown poodle, all Cameron Diaz up in the dog park. Supermodel, work! Work it, girl! 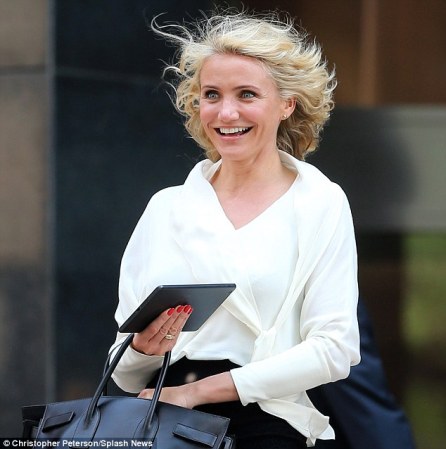 I hope she steers clear of this crafty one. 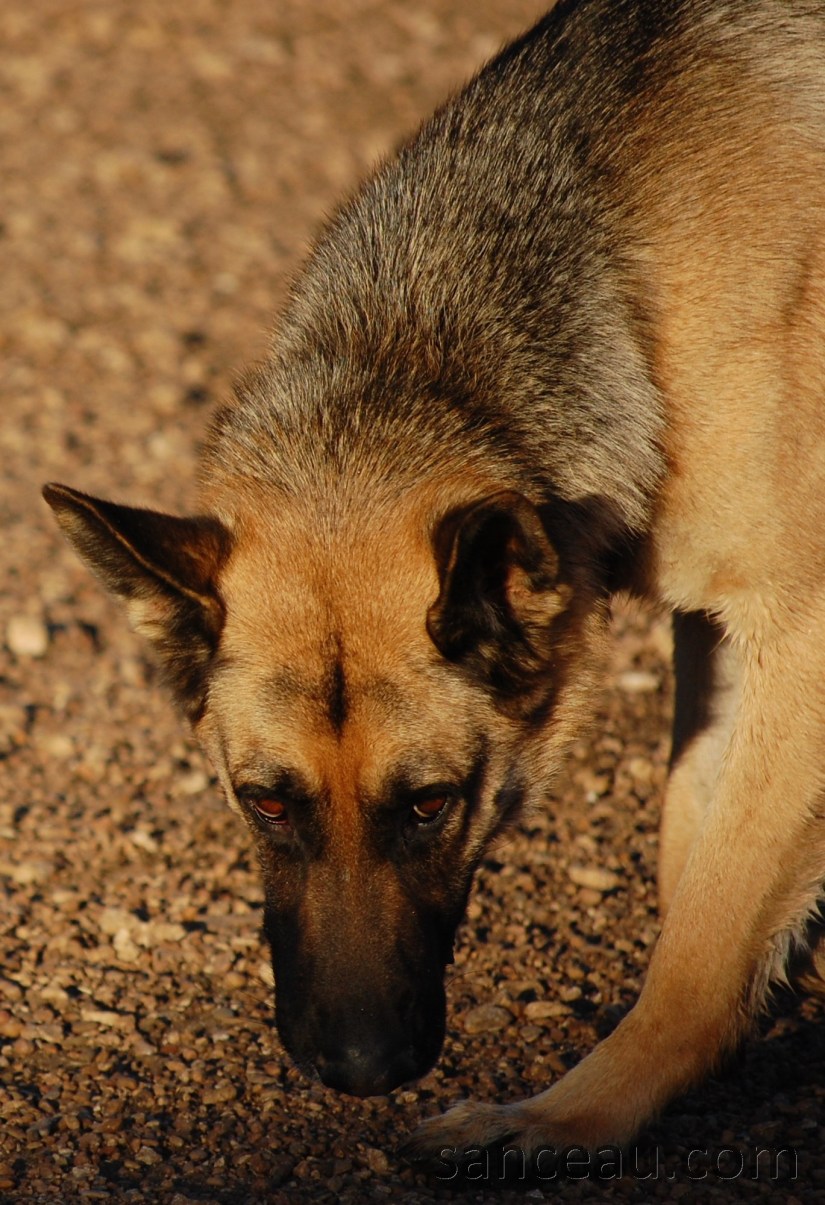 He’s clearly up to no good. I think he’s planning a skirmish. Germans, right? I hear you.

And this little white number–I thought it was a rodent or a mop rag before I figured out it was a dog. A small dog. Which is basically a cat. 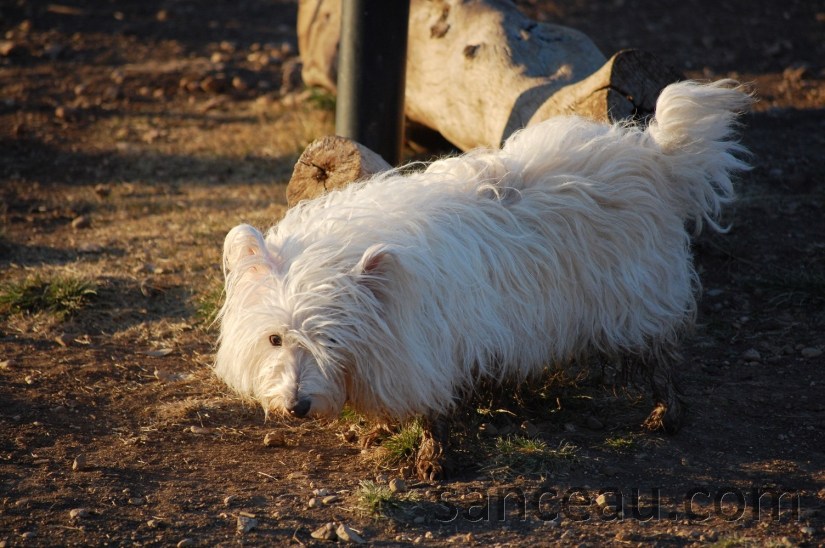 This pied beast is not a cat. His mother was in fact a cow.

Nor is this a cat, although he’s as disinterested as one. He’s the Posh Spice of canines.

Or is he just consumed with regret? 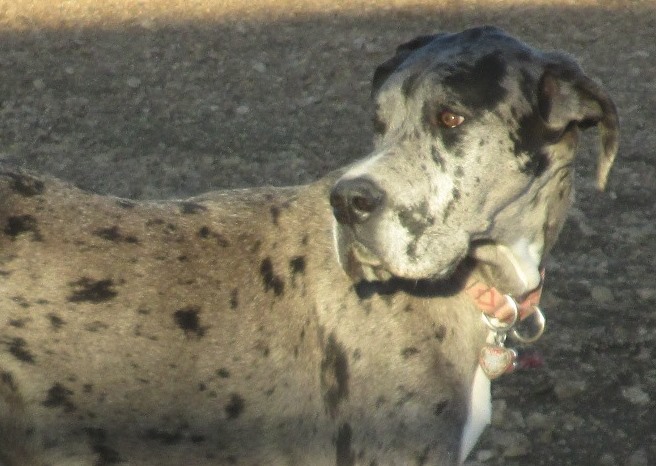 Why did I ever let Tawny go? Look how her beautiful coat shines in the winter sun. Don’t know what you got ’til it’s gone…

Tawny is moving on with her life.

This guy has a dirty tongue, but I like his attitude, his enthusiasm, his joie de vivre. 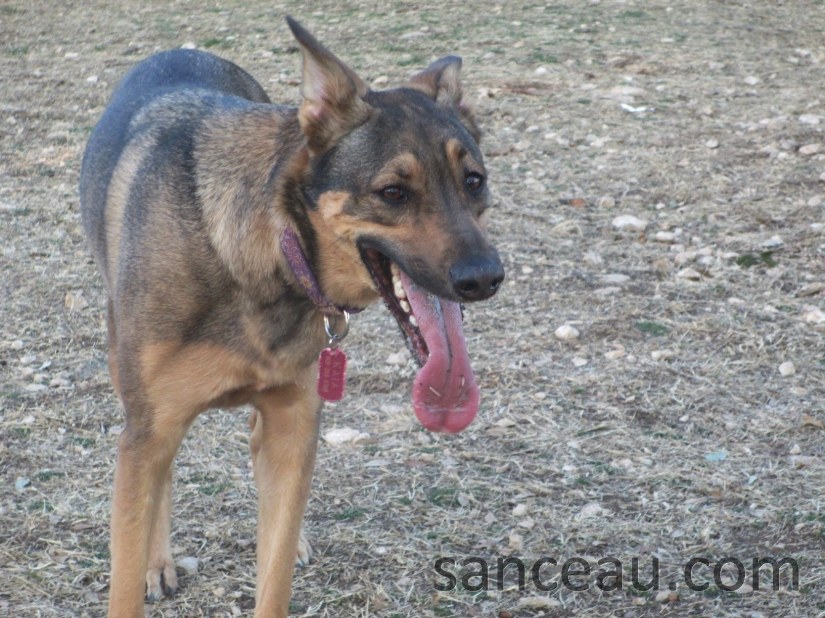 These two are ready to rumble.

Okay, one more dip in the pond before it’s time to go. Twist and shout! 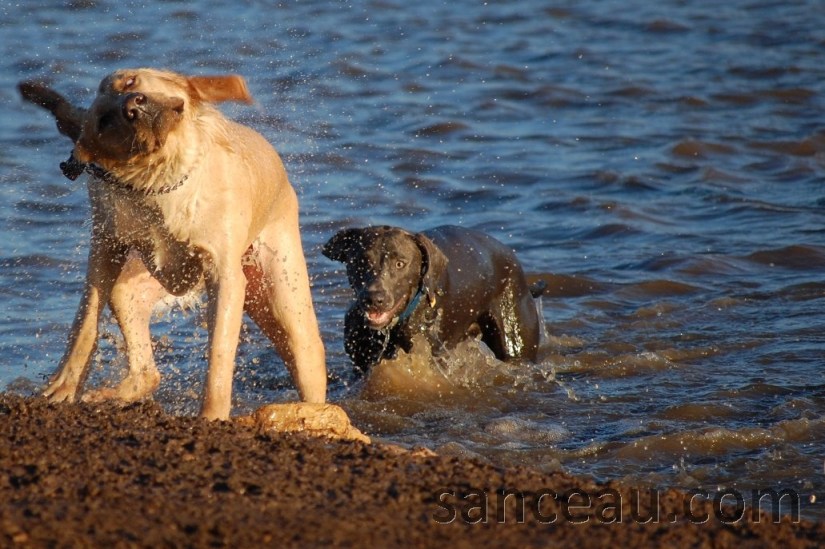 Mercy, I could take this post in any direction with this hodgepodge group of adolescents. Instead, I want to use this forum as an opportunity to discuss industrial sites and illegal waste dumping and just get a dialogue going. No, not really. I want to talk about hair. Particular the boy in the Florence Henderson top middle spot there. That is fuh-lat. A flat top, to be precise–not to be confused with a hi-top fade.

This little guy’s would-be bangs are like little frosted gravity-defying daggers. No wonder he has such swagger. He knows he’s got game.

Men from Simon Cowell to Dolph Lundgren would later sport flat top hairstyles, but not to this extent. This stiff cut brings to mind a bed of nails.

In this group, there is an obvious loser (I’m talking to you, Gay), and it’s not because she doesn’t have a flat top. John’s smiles betrays the truth and the shame of locks gone flaccid. But Larry is the boy with the flat top, and consequently–the bright future.

But Larry’s look doesn’t just happen; a cut this tight demands vigilance, constant maintenance, even weekly visits to Floyd’s Barber Shop. Otherwise, he, too, could become like John. And those are their real names.

Ever heard of the Hindenburg? The airship that caught fire? “Oh, the humanity?” Anyway, it was named after Paul von Hindenburg, the German president who was considered the only candidate who could defeat Hitler in 1932, due in part to the power of his flat top.

Hindenburg was in fact re-elected but eventually appointed Hitler Chancellor the following year, at which point, the Nazi Party began its rise to power. If his flat top had been maintained, WWII would never have happened.

And that, my friends, is one to grown on.

Yesterday, after a second service sermon (oh, how my pastor would love that alliteration) and a meal of brisket, beans, and cole slaw, we took advantage of the 77 degree weather (which has now–as per the usual winter inconsistency–become 44 and will become 18 this evening–honestly, it’s like living in a BIPOLAR vortex) and took our two dogs to the nearby dog park.

While we were there, we noticed an enormous black monster truck of a dog. It didn’t run; it galloped. Furthermore, it lacked any clear features. It was in essence, a big black furry blur. At first, I thought it might be Obama’s Portuguese Water Dog, Sunny, but it was too large. After consulting with my canophilist friend, Lisa, we determined it was in fact a Jacqueline Kennedy Bouvier Des Flandres. And while neither the Kennedys nor the Obamas possessed such a breed, the Reagans did.

Nancy Reagan aptly wrote that the dog grew to be the “size of a pony.”

They named their dog Lucky, like “Get Lucky,” the song that won both album and record of the year last night at The Grammys. While we’re at it, I wonder how long they’ll continue to use those terms: album and record, especially when an entire generation has never touched an actual vinyl record. Or cassette. And they don’t play CDs. Anway, back to behemoth dog…This was what we saw: 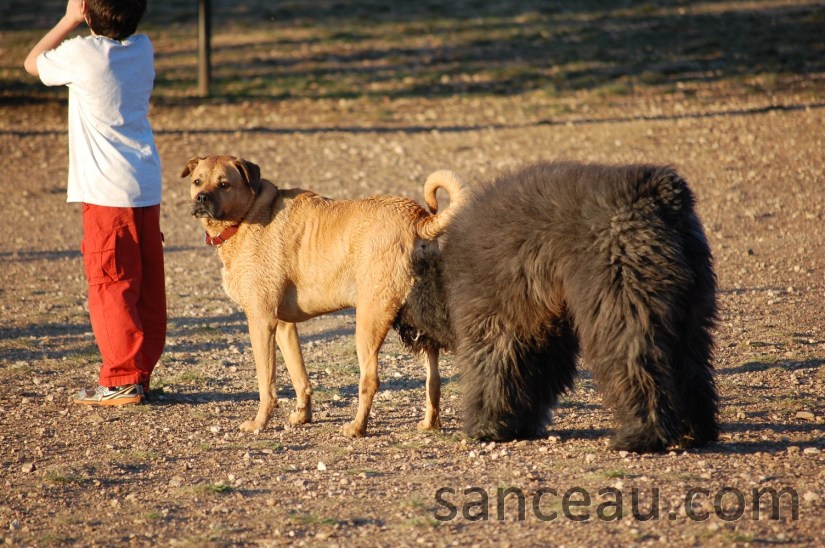 He led the chase. 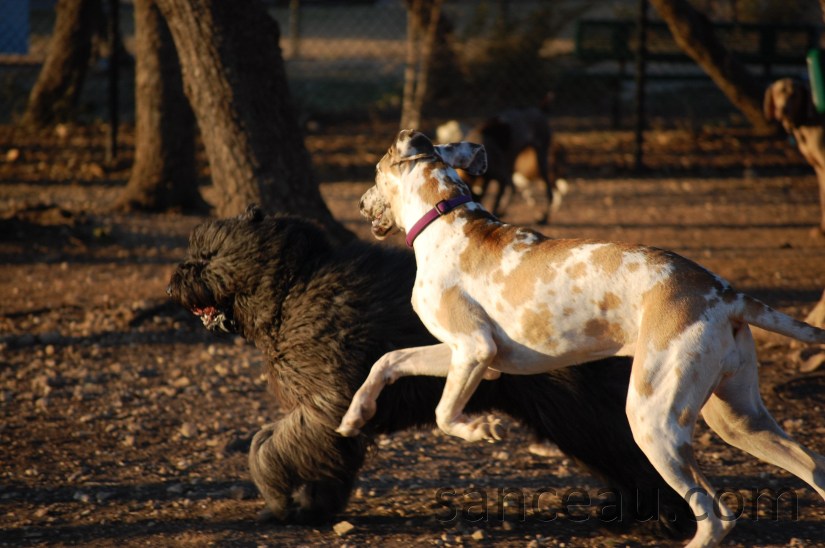 He tried to use his size to bully others, but he got back whatever he gave. 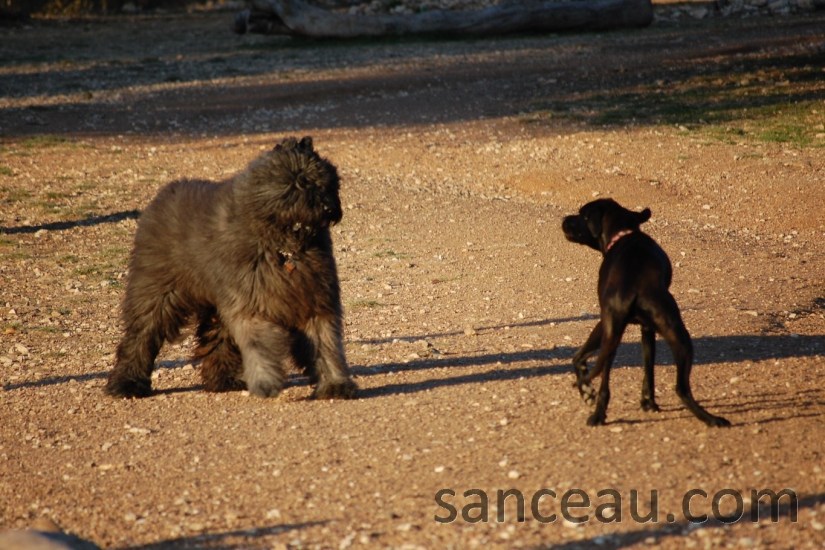 These dogs managed to get him balled up like a circus bear.

He made a grand exit when he finally departed, and a sense of loss filled the park. Five seconds later, the dogs began molesting each other again.

This is Tonto. He is not bright. Hence, the name. Whenever we take him to the dog park, the other dogs get confused and think he is a she. He is not. So he flees. 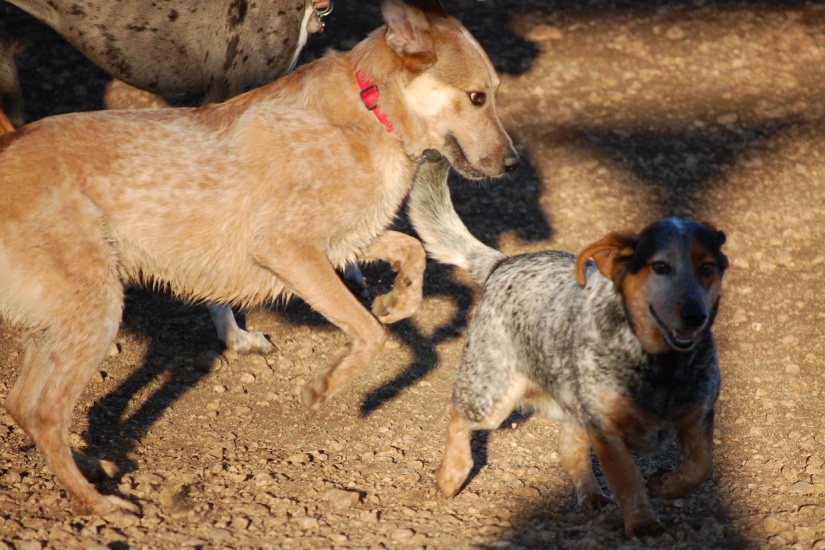 But he’s not just a victim. He sniffs other dogs as well.

Just one more for good measure.

At first, dog parks seem like a good idea.

But dog parks are really just a big humpfest.

Some are full of trepidation.

And some just want to play with a beat-up yellow Frisbee. 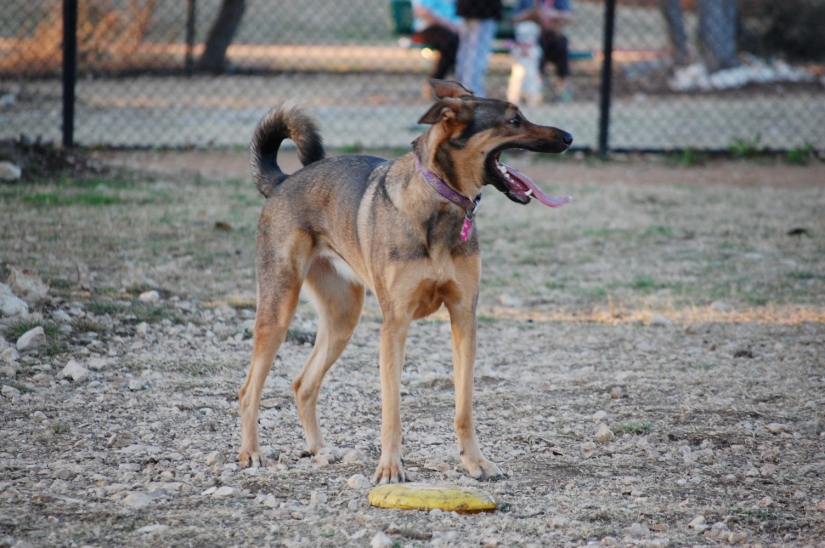 Nobody could rock a hoop earring like Jody (“Lookin’ For A New Love) Watley. Rumor has it that she hasn’t shrugged since the mid-80s. Many people tried to copy her style. Some went so far as to marry it with a quilted jacket and hat. Oh, no, you di’n’t…

Even modern-day Watley can’t rock a hoop like 1987 Watley. Sometimes you just need to let the style go gently into that good night. These earrings look about as silly as the albino Unibomber behind them.

And as for quilted jackets, these two guys are doing it right–though they don’t appear too thrilled about it.

Maybe they’re upset because they’re using a generic toilet paper, and their bums are all bristly. They should try this: 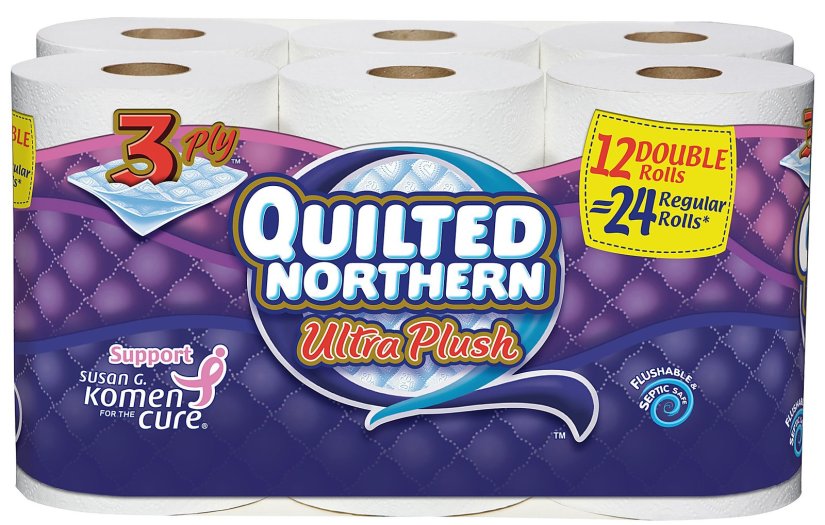 I used to watch Good Times when I was young, and JJ would always answer the phone, “Cello?” (like the instrument). It reeked of cool, even for a gangly ghetto brother.

Before facetiming and apps and smartphones that could shut your garage door for you, phones were a means of communication by using one’s voice. Certain phone images from pop culture take us back to moments in our lives.

How could we forget the iconic scene in It’s A Wonderful Life? I can feel the sexual tension from here.

This one still gives me the creeps. “We’ve traced the call, and it’s coming from inside the house.”

Surely you remember this scene in 1985’s Pee-Wee’s Big Adventure when Pee Wee tells the bikers, “Shhh! I’m trying to use the phone!”

Even E.T. tried to get in on the action. But he never did phone home.

But the celeb with by far the most phone pics is the one and only Norma Jean Baker. She favored cross-your-heart phones, endorsed by her pal Jane Russell.

Apparently, she tagteamed quite often.

Although at home, she needed the casual ease of one hand free to express herself.

In her earlier years, she posed with phones for cheesecake shots. I bet there wasn’t even anyone on the line…

Then she got the call from JFK: it was over.

And she took it well.