You heard it right, folks. 2020 has been a tough year on all of us, especially George, who evidently had a few too many old-fashioneds and plowed his car into yet another Bedford Falls tree. Environmental agencies are livid. As you can see, even Shirley Temple tried to uproot nature’s oxygen-releaser to replant it in a safer space, preferably Holmby Hills. This time, poor weather could not be blamed.

The recorded dialog below reveals that food vendor Pietro was understandably incensed. “You pay for my vegetables–yes?” In this year of electorate division, I think we can all agree. Pay for the vegetables, George. 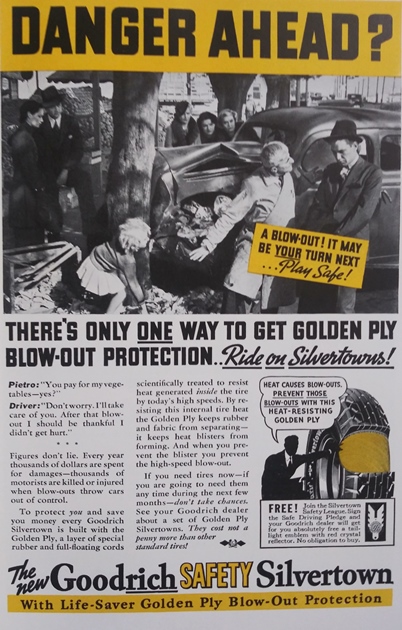 So much in this one tiny image. The slender woman at the balcony, trying to fill the emptiness of her husband’s neglect with six ounces of Earl Grey, as he obliviously tries to pack away his clubs into a luxuriously long and lean baby blue ’64 Cadillac. Note the fender skirt. Have you ever driven a car with a fender skirt? Has the term changed because a skirt implies gender, though cars are often thought of as female? Can I call this a house of antebellum architecture? Or is that passé, now that Lady Antebellum has become Lady A, due to the fact that columns = slavery = plantations = racism? Better take Lincoln off the penny, as he denotes STRONG connotations of the Civil War, and we shan’t want to be reminded of that baser time. In fact, weren’t ALL times baser? Do not we become more woke and woke each day? At least, we all have the right to vote these days, but what of Yellow Dress up there? How can she get to the polling booths if Stan is taking the car? There was no mail-in in 1964. LBJ beat Goldwater that year, but perhaps his victory lies in part, due to all the housewives who simply could not make it to the booths that year, due to their golf-happy spouse’s Tuesday game. Makes you wonder. 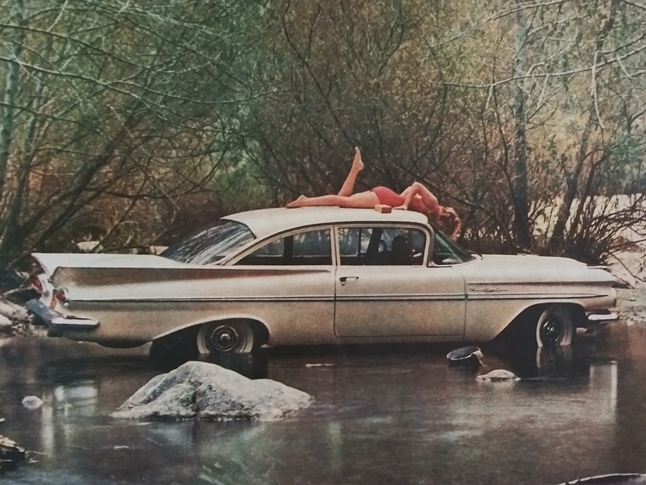 I guess I don’t get the artistic vision of this ad. To me, I see a car unable to simply cross a shallow stream, a driver who has abandoned his vehicle, and a half-naked woman pressed against the windshield, foot whimsically in the air, brick at her side.

Of course, that’s sexist. SHE could have very well been the driver when the LSD kicked in. She drove right into a creek. She took her clothes off. She got on top of the car to get a better view of the melting dancing hippos inside. But the brick? I don’t get it.

Citizens of Denton, Texas had several choices when it came to cabs in the 1940s. The men below were all licensed taxi drivers for City Cab. 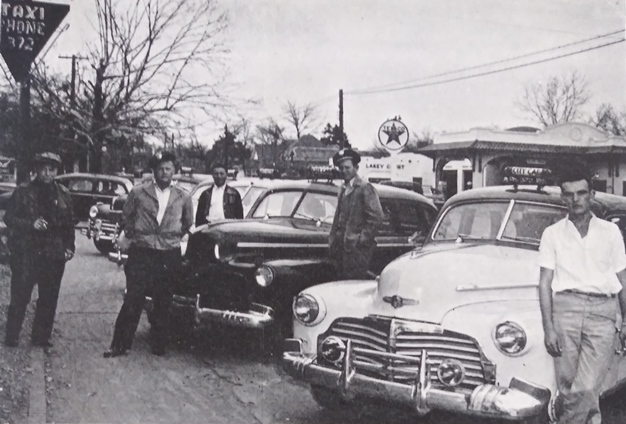 They could even carry your luggage for you.

Dixie Cabs had the recognizable logo on the side. All you had to do was pick up the phone and dial 45 for service. 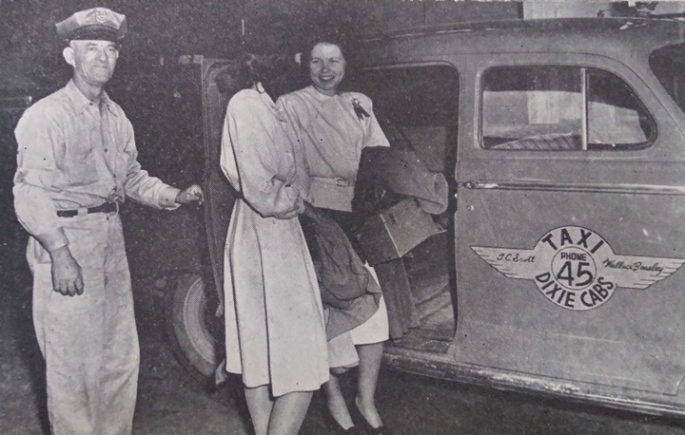 For a more rugged crew, you might consider the fellows at 2100 Cab, right next to the Sinclair station. They kept their fleet shiny.

Teens from a migratory labor camp pose in The Boogie Woogie jalopy outside the post office in Belle Glade, Florida in 1940. They don’t look much different than teens of today.

Over 100 years ago, a “motor-driven vehicle” and its owners somehow made it up to the top of this felled sequoia in the Sequoia National Park, presumably without 4 wheel drive.

In 1932, Texaco introduced Fire Chief gasoline to the nation, a “super-octane” motor fuel touted, as you can see above, as “surpassing specifications” for  emergency vehicles. Ed Wynn promoted it on his NBC radio program called the Texaco Fire Chief.