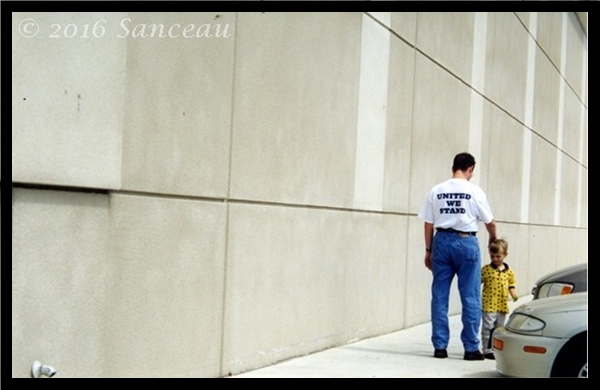 I used these images in a post from several years ago, but they are still powerful on this 15th anniversary of 9/11. For the rest of the pics, click here. 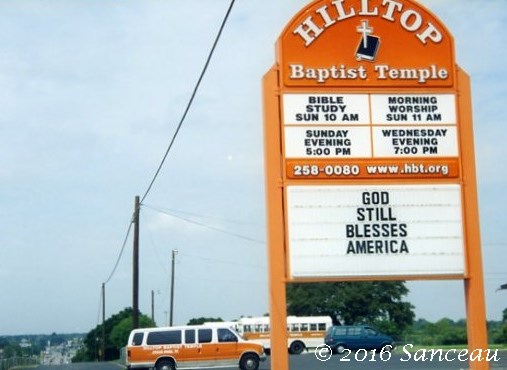 These two ladies keep their eyes peeled for cooler weather (while wearing fabulous hats and dresses) on the kind of day that warrants nickel ice cream. I know it will arrive later this month, the glorious season of fall. But I also know it won’t feel like fall until Halloween. Still, I can see it on the horizon, and what joy that brings!

Why is FDR howling with laughter? He and son James, along with William McAdoo and advisor James Farley, are responding to the quips of Will Rogers as he introduces the new president in 1933.

“Mr. Roosevelt is a plain-spoken man. Remember that speech last night about the banks? Long adjectives and nouns–he didn’t mess with ’em at all. He knows what the country wants is relief and not rhetoric. He is the first Harvard man to know enough to drop three syllables when he has something to say. Why, compared to me, he is almost illiterate.” — May 7, 1933

As I read that aloud, I can hear the man’s voice saying it. I wonder if you hear it, too? That typical 50s voice. “Why, Dick and Jane even give their dog, Spot, sausage and eggs every day, and he’s never felt better!”

The Kansas-Pacific Railway promoted buffalo-hunting parties back in 1870. Outside the railroad’s general offices, a taxidermist displays his work. 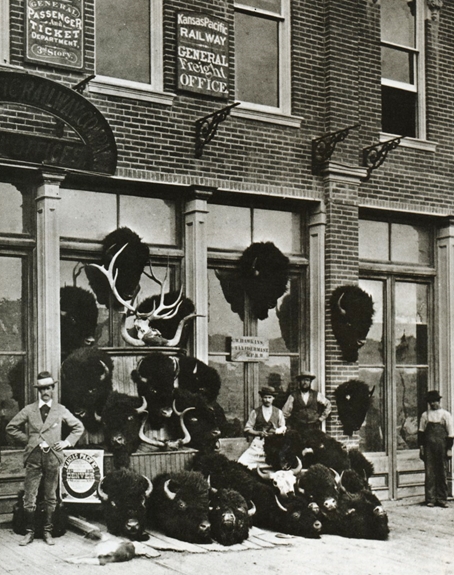 Don’t worry; they’re off the endangered species list. The population is stable and you can enjoy a nice sammich, should you so desire.

The tangy stack features seasoned ground bison (aka the American buffalo) nestled on a bed of shredded celery and carrots. All that’s topped buffalo sauce-infused sharp cheddar cheese, grilled onions and jalapeños, and then smothered with housemade buttermilk ranch and Frank’s RedHot dressing.

Back in the day, khaki wacky meant boy crazy. It appears that this doll has gotten hooched up on Borden’s milk and lost her inhibitions. But who could blame her? The nifty fellow on the left is so brawny and statuesque, while his bold-collared pal is sporting a buck sweater that no gal could resist.

And I’m serious about khaki wacky. It was even a series of comics.

I’m tired of the heat, tired of the over 10,000 mold count that makes it feel like a screwdriver is stuck in my temple, tired tired tired of sweating inside my own home. I’m ready for the fall, for the brisk, cold air, and this 1946 Plymouth ad makes me want to pop right inside that kitchen and fill the gravy boat.

Hello, readers! Now that it’s September, we move from Olympic Games back to funny names. And the winner winner (chicken dinner) for Freaky Friday’s funny name is Freek de Jonge, the Dutch cabaret performer and writer. Yes, you heard right, folks! Freek it is!

Around these parts, “freak” is a pejorative, used to express contempt. For example, when we spot a curiously-coiffed and curiously-clad person, we often say, “Look at that freak on a leash,” a reference to an old Korn song. However, in the Netherlands, Freek is short for Frederick, which means “peaceful ruler,” derived from frid “peace” and ric “ruler.” So if you named your dog Freek, you actually could put him on a leash.

Frederik “Freek” Jan Georg de Jonge, who celebrated his 72nd birthday just this week, was born in the village of Westernieland. As festive as that name sounds, the family sought greener grass first in Workum, then in

Today we look at the face of the USO, Bob Hope. Back in 1991, on the 50th anniversary of the USO, he penned this letter.

Well, American soldiers are still in the Middle East, but Bob Hope is no longer with us. However, we shall never forget the years of dedication and contribution that he gave to our men and women of the armed services.

Though his first USO trip  was in 1942, his first combat-zone tour was the following year when he visited troops in North Africa. From there, he toured Italy. While in Palermo, the Germans staged an air raid on a target next to his hotel. He realized it was better to bomb on stage than to be bombed from above. General Patton suggested Hope and his group, including Frances Langford and Jerry Colonna, go to Algiers for their own safety.

One of his signature jokes ran, “You remember World War II–it was in all the papers.”

But Hope didn’t quit when WWII was won. In the following decade, he entertained troops in the Korean War.

Just check out this soldier’s response to Hope’s performance in Seoul, Korea in October 1950.

But it wasn’t only able-bodied troops he entertained; Hope and his celebrity pals toured hospitals to encourage those who had been injured. He and Marilyn Maxwell spent time with Marine PFC Howard Wells in the Tokyo General Hospital.

As decades passed, Bob Hope specials were a veritable who’s who of stars. But no matter the rise and fall of his cohorts, Hope was the one constant.

With Jerry Colonna as Santa, Hope made fun of his “road to” movies in Vietnam. By then, Hope was such a well-known actor that his familiar presence was a comfort to those who’d grown up watching him. 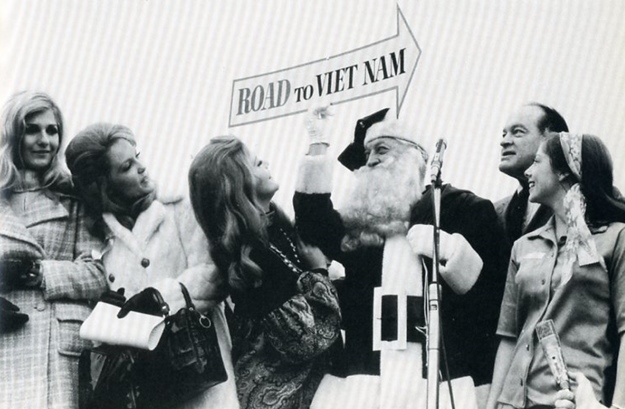 I recall watching Bob Hope specials as a child, much like the one below from 1983. 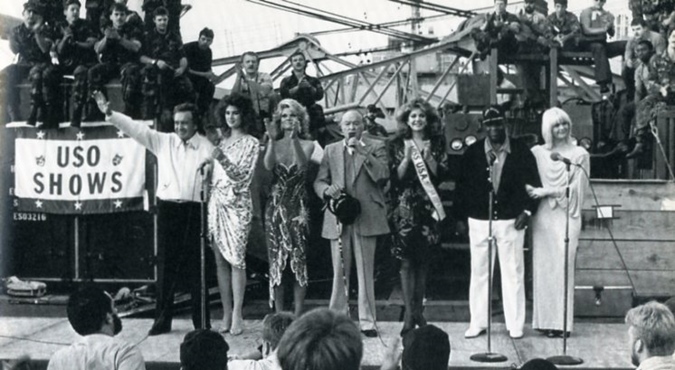 Aging didn’t slow Hope down. During the Christmas of 1990, Hope toured the Persian Gulf with his signature stamina. If you recall, this is a man who lived to see his 100th birthday. 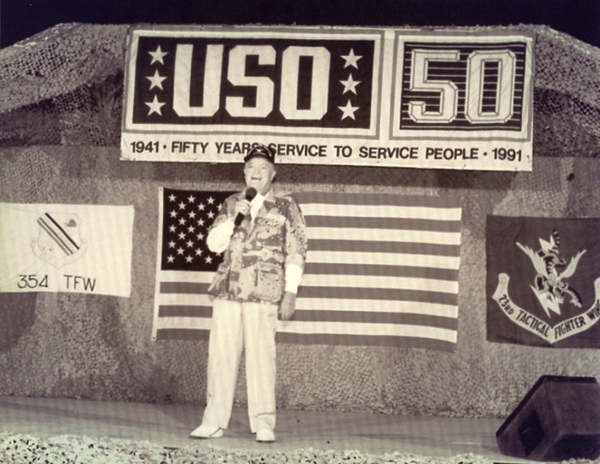 Throughout his 50 years of service, Hope lived up to his name, giving hope to those brave soldiers who fought to keep us free. God bless you, Bob Hope.

Soldiers on leave could check their children with this woman (at a somewhat precarious-looking early day care) to enjoy a night out with the wife.

Below is the YWCA Honolulu building Service Women’s Lounge for women serving in the war.

Among these nattily-dressed women is Mary McLeod Bethune, president of the National Council of Negro Women. She is supervising a USO game of Chinese checkers.

Soon, celebrities would begin to entertain the troops. The first was Joe E. Brown, whom you may recall from last month’s post, Ripped At Sixty. He was the first Hollywood star to tour front-line bases, including Alaska and the Aleutians in 1942. Sadly, that same year, his own son was lost when his A-20 Havoc crashed during pilot training.

Brown was one of only two civilians to be awarded the Bronze Star in WWII. But by far, the name most connected with the USO was Bob Hope, whom we’ll spotlight tomorrow.