Just look at the grin on the fellow biting his lower lip, as President Warren G (the president, not the rapper) Harding throw out the baseball to start the April 1922 season. Guess that didn’t happen this year.

The originator of the tradition was the portly and oft-ridiculed President William Howard Taft, seen throwing out the  first pitch at a Washington Senators game in 1910. (AP Photo, File)

But before you go, let’s make sure that you have one bit of trivia in that noggin of yours about our 27th president, that has nothing to do with his size (which seems to have vacillated from 243 in college to a high of 330 and then down again).  His father was a former US Attorney General, and he himself was named by President Warren Harding (above) to the Supreme Court in 1921. Yes, he was the Chief Justice of the US. And no, he never got stuck inside a bathtub.

Before IKE meant “I know, eh?” which sounds soooooo Canadian, Ike meant Dwight Eisenhower, as in the former president. All the boys in his family were called Ike; he was “Little Ike” as the youngest. And who could have imagined one day women would be sitting on a hardwood floor, clapping for him, wearing his nickname all over their flouncy dresses?

Five years after he’d left the White House, Truman (not visibly flanked by any Secret Service) took a monthlong Mediterranean tour. Here, he walks through the alleys of St. Paul de Vence. Behind him are his traveling companions, Mr. and Mrs. Sam Rosenman.

Other vacations were less formal, like this trip to Key West, Florida in November of 1951. The man holding up swimming trunks is General Harry H. Vaughan. 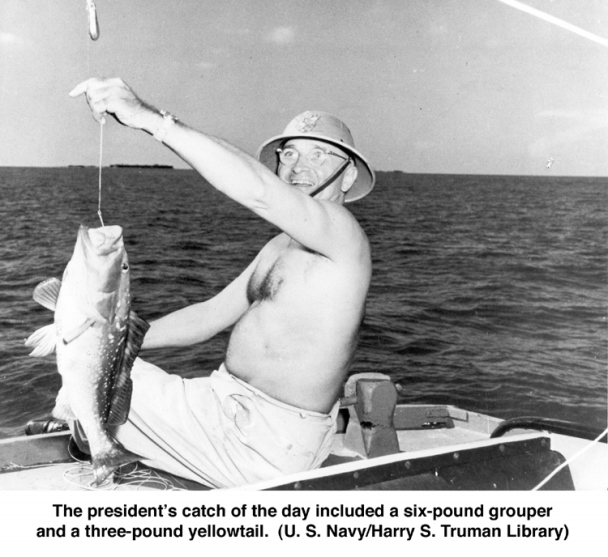 Doesn’t he look happy as a clam in the Key West “chow line” for lunch?

Nothing slowed old Harry down.

President Truman didn’t pass until the day after Christmas of 1972 at the age of 88. His wife, Bess, outlived him by another decade, making her the oldest living First Lady to date.

Here they are with daughter Margaret in the lounge of the American President Lines’ President Cleveland, April 28, 1953, before sailing for San Francisco and home after a one-month Hawaiian vacation.

It’s August of 1864 at the Potomac headquarters, and Captain Charles Frances Adams, Jr, appears to have the best back support.  He is flanked by officers of the 1st Massachusetts Cavalry. The man on the far left is unknown, the man sitting backwards in his chair is  Capt. Edward A. Flint, and the far right is Lt. George H. Teague.

He would die five years later. Isn’t it amazing to see an image of a man born in 1767? After he left office, Adams won a seat in the House of Representatives, becoming one of only two presidents to hold political office after serving in the White House (Andrew Johnson returned to the Senate shortly before he passed). During a passionate debate, Adams suffered a heart attack on the House floor and died a few days later.

Today marks the birthday of our 8th president, Martin Van Buren. This morning I couldn’t have told you one fact about him. But now I’ve learned several!

Now check out Einstein and his handsome cousin.

Why is FDR howling with laughter? He and son James, along with William McAdoo and advisor James Farley, are responding to the quips of Will Rogers as he introduces the new president in 1933.

“Mr. Roosevelt is a plain-spoken man. Remember that speech last night about the banks? Long adjectives and nouns–he didn’t mess with ’em at all. He knows what the country wants is relief and not rhetoric. He is the first Harvard man to know enough to drop three syllables when he has something to say. Why, compared to me, he is almost illiterate.” — May 7, 1933

One hundred years ago, incumbent President Woodrow Wilson used newfangled machines on wheels to get his message of peace across to the common man (not woman, of course; they were still unable to vote). While Europe had already entered WWI,  Wilson remained popular with his campaign slogan “He kept us out of war.” He defeated Supreme Court Justice Charles Evans Hughes, the Republican candidate, by a narrow margin. And then he sent our boys off to war the very next April.

I got my paws on a December 1939 Fortune magazine this week, which contained several interesting graph results of a readers’ poll. Keep in mind that there was no television then, no internet, no means of learning up-to-date war information other than radio or newspaper.

This question was: Which statement best represents your idea of Germany? 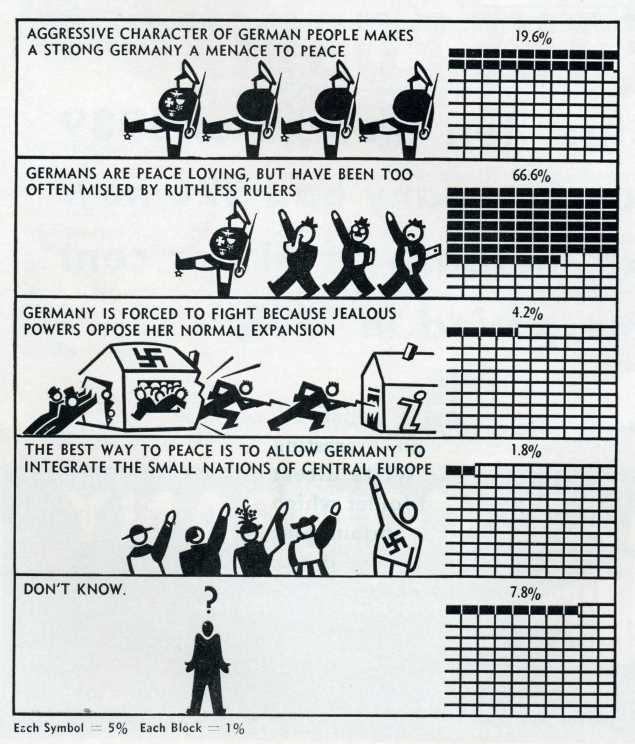 Most Americans believed that Germans were peace-loving, misled by ruthless rulers. Understanding that Hitler was the most ruthless of rulers, impending war led to this question.

I love the body language on these little black bodies. Yes, maybe, and hell to the no.

At this point, the four-term FDR was only in his second term, and readers had no way of knowing if he would go on to serve again. Look how cute they made the innacurately non-wheelchair-bound but accurately chainsmoking president look. Reports say he smoked 20-30 cigarettes per day! And as you recall, he did have polio, so he could not walk unassisted.

The last question simply asked if those polled wanted to keep FDR in the White House at all, which nearly half the readers did. And why not? Did you ever see a happier horse with a cigarette holder, swimming away from a crocodile?

There are times in your life when you become aware of what seems like it should be such common knowledge, that you are embarrassed it took you this long to know it. You question your upbringing, your education, your ability to retain facts. Such a thing happened to me today, when I learned that Amy Carter, daughter of President Jimmy Carter, had a cat named Misty Malarky Ying Yang.

Being several years younger than Miss Carter, it is forgivable that I did not know this. But how have 40 years passed wherein this has not worked its way into conversation? Why don’t people make reference to such a delightful moniker?

It’s true. While in the White House, Amy (who turns 47 today) had a we-are-Siamese-if-you-please kitty cat named Misty Malarky Ying Yang. Ying Yang was the last cat to occupy the White House until the Clintons’ Socks, because only a liberal would be willing to feed and house such an arrogant, ungrateful creature. Just kidding.

So happy birthday, Four Eyes! Yes, Ying Yang looks positively thrilled to be in your arms.

My son’s elementary school calendar this month includes a president’s favorite food for each day of the month. Today the president named is Dwight D. Eisenhower, who enjoyed oxtail soup. Though I have heard of it, I have never seen hide nor hair of such a soup, not in a person’s home or in a restaurant. Have you ever tried it?

I visited the Food Network’s site to investigate. Apparently, “the oxtail was once really from an ox but nowadays the term generally refers to beef or veal tail. Though it’s quite bony, this cut of meat is very flavorful. Because it can be extremely tough (depending on the age of the animal), oxtail requires long, slow braising.”

Based on this information, I’m going to have to pass. I don’t eat tail, however flavorful. It’s hard enough for me to stomach dark meat chicken or the fatty part of a brisket; I doubt I would have the patience to gnaw away at a tough tail. I do admit the vegetables look delicious.

In any event, it is a common dish in the U.K., and there is even a fellow WordPresser who has provided a recipe for oxtail stew. He goes so far as to say, “All those odd bits, wobbly bits and squidgy bits have such an amazing range of textures and flavours.” A shiver just ran down my spine. I think he would do quite well to travel with the adventurous Andrew Zimmern, who forced poor Adam Richman into eating lutefisk on yesterday’s episode of Man vs. Food. Andrew loves squidgy bits.

Tomorrow’s president is Ulysses S. Grant, who liked to eat turkey. Now that one I get. And apparently, Ike liked it, too.