When I was a little girl, an ad for Federal Express used a phrase I’ll never forget: when it absolutely, positively has to be there overnight. While I don’t know if these lovely ladies were delivered overnight, I do know a chivalrous deliveryman is assisting with their departure from his truck. Their prom dates look on from the sidelines, as well as hundreds more.

But that wasn’t the most interesting manner of vehicle at the 2003 Fairless Hill, Pennsylvania prom. No, sir. Not to be outdone, these two arrived via motorized stegosaur. Surely that beats limousine any day.

What about you? If you could do it all over again, which would you pick? A Fed Ex truck or a dinosaur?

The principal of Virginia’s Hammond High makes his request known to the lunch lady, who seems exceedingly inspired by the proposition. She cannot wait to tell the others, who have nothing else to do but concoct new dipping sauces. 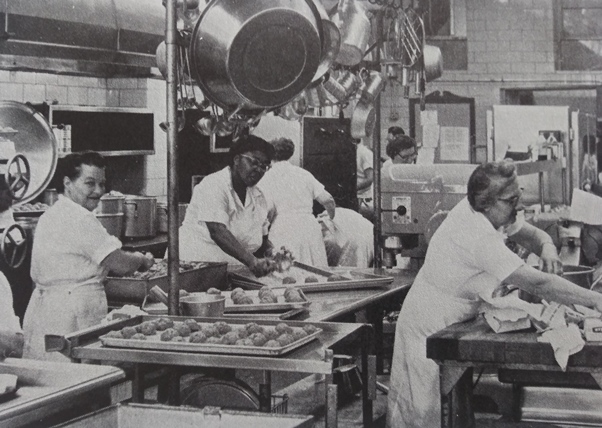 This is what a high school kitchen looked like way back in 1965. No shortage of rolls.

When everyone ate gluten, you could eat rolls and bread at the same meal. Did you ever eat Bond bread?

And lest you think sweet-chili-and-pickle sauce sounds less than palatable, take a gander at this image.

Sometimes presentation is EVERYTHING.

To be fair, all these people are dead. It was 91 years ago that this shot was taken. Little Miss Mary Pickford in her ringlets and sailor dress makes the shot. Sorry if these pics are enormous, but you have to high-res these son-of-a-guns to see the details.

Remember when you were a freshman, and they called you “fish”? Well, evidently that term has been around for awhile.

I love the front-row girl with the double sunflowers.

There were three rooms total of fish in this 1923 class. Most of them are solemn-faced, but I see one with a mischievous smile. I think he’s pulling the hair of the scowling girl in front of him.

You probably think I’m the crazy yearbook lady by now. What do I care about these dead people, long forgotten? Their families didn’t even care to keep their yearbooks. But there is so much history packed into these volumes, young people of every era in all manner of style and economic background. And sometimes the cover itself is so beautiful, I wouldn’t think of setting it at the curb on Trash Day. 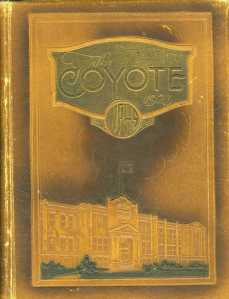 Recession be damned!  The world awaits you, graduating seniors–who were born when Shania Twain hit the video scene, cavorting about in midriff-baring vests like a show pony, which, incidentally, seems like it happened early Tuesday.  See how time flies? No matter!  You’re a high school graduate now.  March into college with your chin held high!  Inevitable burden of student debt be damned!

Can’t you see the looks on those happy teen’s faces above?  The world is your oyster!  Actually, that guy has quite a firm set of crow’s feet there, doesn’t he?  And that receding hairline.  Is he a senior or a senior?   Whatever, I’m getting sidetracked.  The point is, high school is over.  So over.  So yay!  Although you will think about it intermittently over the next few decades, as you fret over lost relationships or struggle with regret and forgiveness and bitterness.

But whatever–your generation has the benefit of social media!  Like, you GREW UP with it already existing.  You know all about apps and tweets and those stupid things like L8R that young people text, which isn’t even connected to proper English.  Do you even know how to write cursive?

Anyway, the point is that life is like lying on a bed of daisies from here on out.  That picture reveals all.  Granted, it was taken in June 1941, so I guess those teens are your grandparent’s age?  Oh, great-grandparents?  Damn.  Well, look how happy they were.  Maybe technically we weren’t fighting in WWII yet, so the future looked bright at that moment.  Of course, by December, there was Pearl Harbor and then you know what followed.  Oh, you don’t?  WTH?  Don’t they teach History anymore?

So what happened was the Allies won ultimately.  Cool, huh?   And then there was peace and young people moved into cookie cutter houses like Levittown and all was right.  Except then there was the Korean War.  And the Cold War.  And Vietnam.  That one didn’t work out; you can see the aftermath of that on street corners. You’ve probably never heard of the Falkland Island War or Desert Storm…  Anyway, the Berlin Wall came down, so it’s all good.  Except for the Middle East and North Korea and the debt to China.  But things will totally work out. Ebb and flow, you guys.  You got this.  Totally.

And just in case you’ve never heard this SUNSCREEN song (which I still cannot FATHOM is as old as YOU ARE), take heed:  http://www.youtube.com/watch?v=I5NAPZp2w-o.  It’s a way better motivational speech than I could ever give.

From Pam to Renee in their 1972 yearbook:

Actually, Renee, you may not have known it at the time, but it was gonna get a whole lot more messed-up.  Reference the 2013 gas prices.  What do you think Wayne Stevens would think about that?  He was pumping gas for a quarter a gallon.  A QUARTER PER GALLON!!!!!  Super duper indeed. 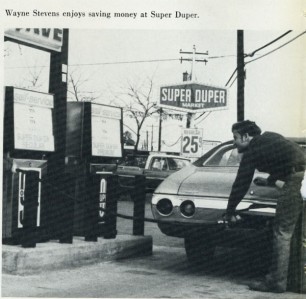 But I get it.  It was high school.  Life wasn’t peachy keen.  Clearly, you had it in for Miss Toni.

I have decades upon decades of yearbooks, but there is nary a HINT of profanity in any year until 1972, when the world went to hell.  Miss Toni must have liked one of the numerous boys whose name you underlined in red.  Was it Steve?  It was Steve, wasn’t it?  This is all so very Marsha, Marsha, Marsha.

Big deal.  Take a chance on Leslie.  His hair swoops majestically like an eagle over a canyon.  Plus, he has that Taylor Lautner hammerhead shark forehead that the tweens like so much.

And hey, if you’re still bitter, shove her in a fridge, like your peers did to poor Vickie.  I think we finally found a job for the Maytag repairman.

Gracious, Renee!  What was your problem?  I just found another girl whom you evidently perceived as the dark lord, horns and all.

Honestly, I’m more concerned with Sandy, who seems to be melting right off the paper.

You just need to chill out in a new Pinto, car of the future. 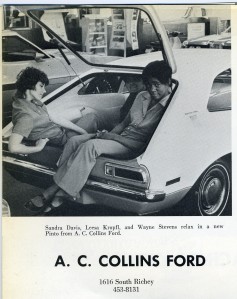 Or take some barbiturates–I know they sold them then.  Ask these two classmates.  They should know where to score some.

Or hang out with the annual staffers; they know how to have fun.  Buy the world a Coke and keep it company.  And rock that tie, girl.

And hey, if that doesn’t work, you can always pledge Zeta Phi. 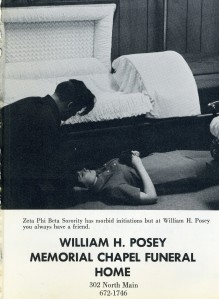 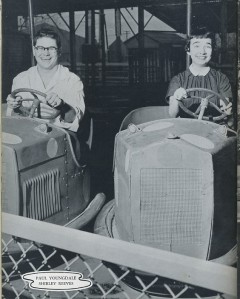 And that, my friends, is the difference between men and women.  Adrenaline delights one and strikes fear in the other.  Today’s post documents the Senior Class Favorites of the 1955 Pine Burr, selected “as tops in fun, sparkle, and friendship.”  Most yearbook pictures are taken on location at the high school, but evidently these favorites traveled off site.  Why, Jo Ann and Edward got suited up for a poolside session.

Perry and Pat went horse riding through what appears to be a swamp.

Earl and Shirley were stuck riding pretend horses on a carousel, as though they were still young children.

Thurston and Lovey Howell enjoyed an afternoon of boating.  Are these people really teenagers?

Susie and Morris enjoyed a bicycle built for two.

Barbara and Donald braved gusty winds to sit on the dock of the bay.  Or is that a bridge?  Look, Barbara, I’ll catch that catfish for you and fry it up for dinner with some hush puppies.  Won’t that be swell?

Miss Wheat is delighted that Mr. Turner parked next to her namesake.  Or are those plumes of feathered reed grass?  It may be Daddy’s car, but he’s got quite a grip at 10 and 2. 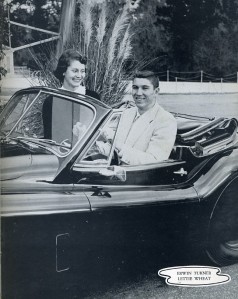 Our last picture is the Football Sweetheart.  Wait–isn’t that the same girl (with her name misspelled) wearing a polka dotted cape and sitting on a diving board earlier?  She gets around.  She’s a double favorite!

My advice to you, Miss Yianitsas–marry one of those football players asap and shed that tragic maiden name.  Preferably Earl Wright.  It’s just one syllable!