They ride banisters backwards in their pedal pushers.

They play a rousing game of Old Maid.

Sue can rock an old piano whilst wearing a kerchief.

But it isn’t always fun and games. Sometimes things go wrong, like having a flat tire.

Or the TV stops working.

And being slaves to fashion is hard work!

But the most fun is a slumber party, with nightgowns and curlers in their hair. 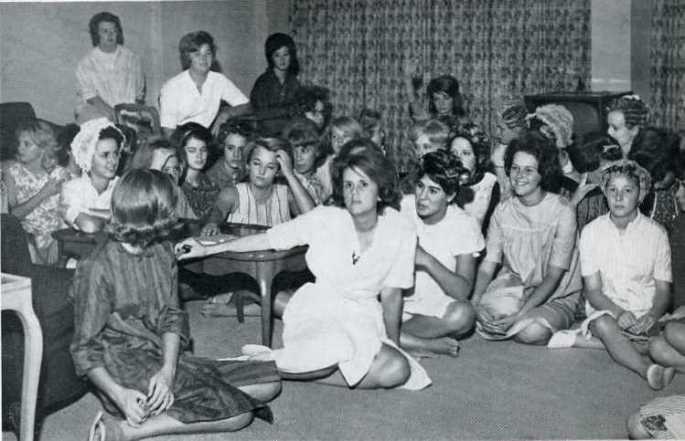 Yep, there’s no doubt about it. These gals know how to have a good time!

I am as excited as the Saturday Night Live Target lady today! Not only did I procure another ancient history yearbook for my collection, but it cost ONE DOLLAH. Yippee!

It was during this 1963-1964 school year that JFK was shot and killed. But honestly I don’t know if that was enough to make these Oklahoma Sooners put down their cups for one second. The fraternities and sororities sure knew how to party:

I didn’t know “raise the roof” was a popular term fifty years ago, but these fun-loving Greeks were clearly raising it.

And they partied like rock stars. Even Bo Diddley got in on the action. 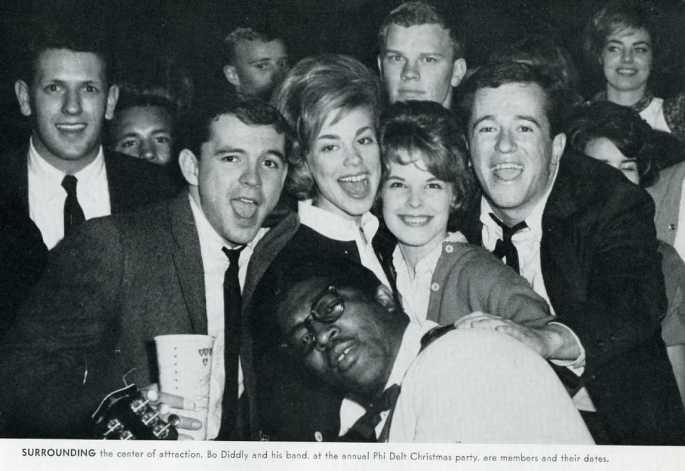 But partying can get out of control. I think Roger got a little too fresh with Jeanne… 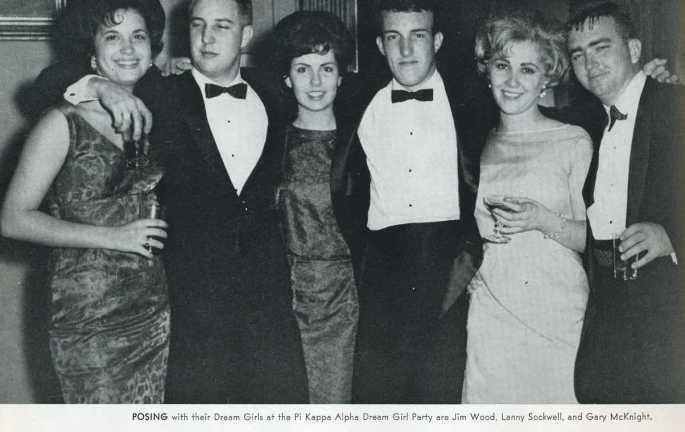 Old or young, it didn’t matter. DEKEs liked to have a good time.

Eileen could barely contain her excitement at the TGIF Party. 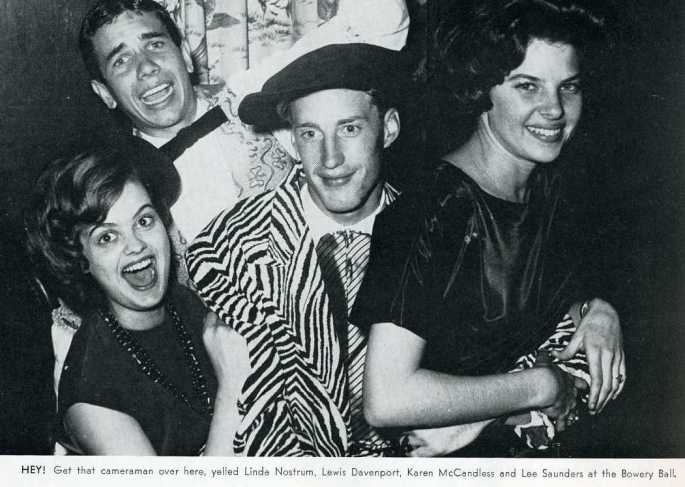 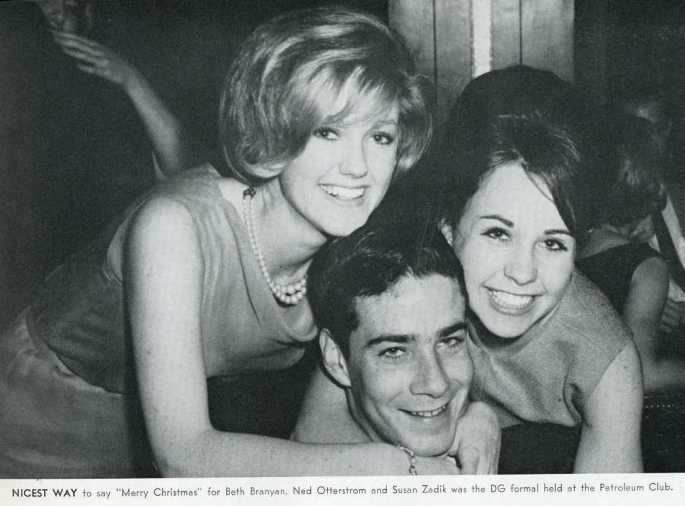 And Zeta Tau Alpha wore their sunglasses at night. Too cool for school, you guys. 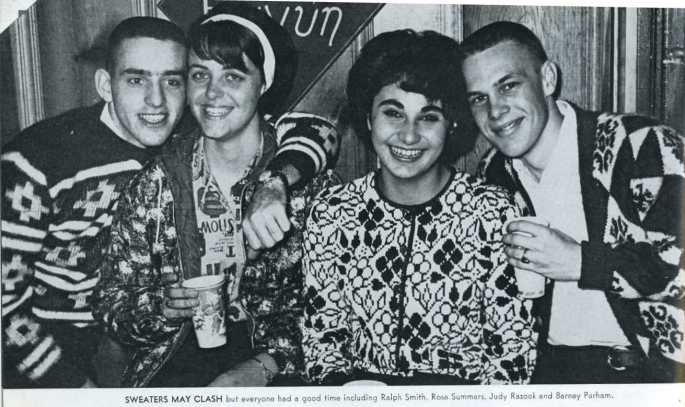 This may have been the first Ugly Sweater Party in history. 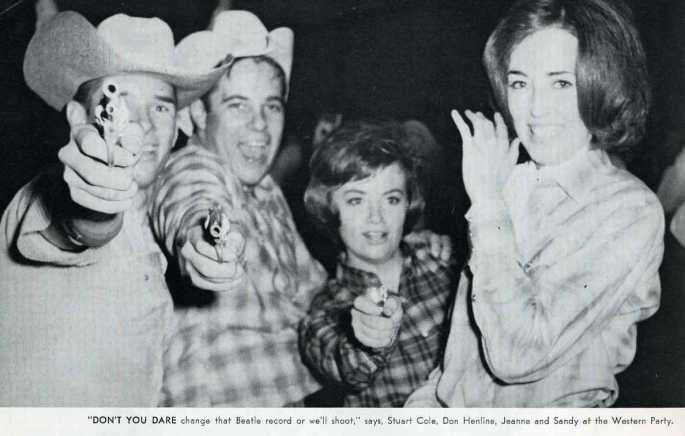 Evidently, there was only one Beatle in 1963. 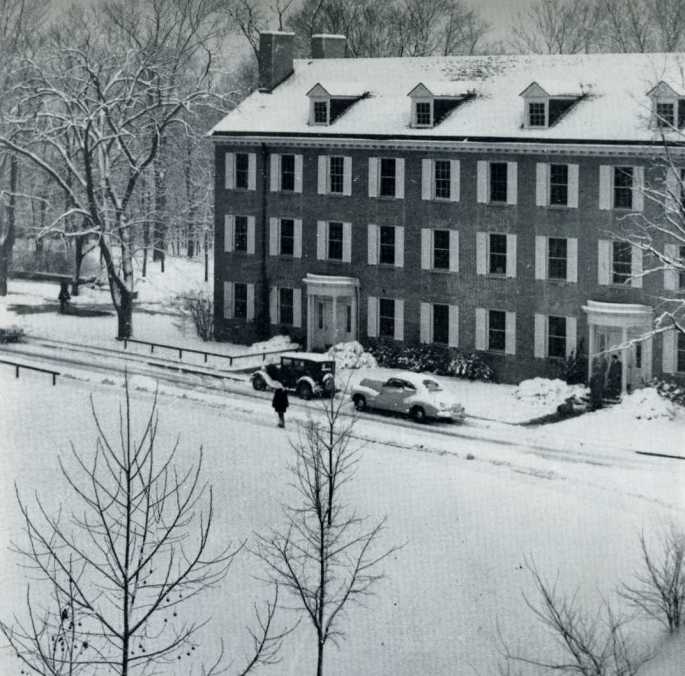 First off, let’s give thanks to the hardworking yearbook photographers, who not only captured this great winter wonderland, but would have had to do serious bicep work to carry those old school cameras. 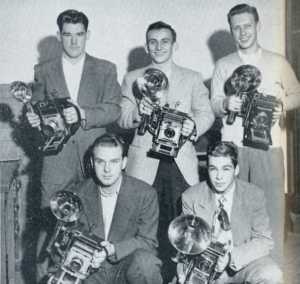 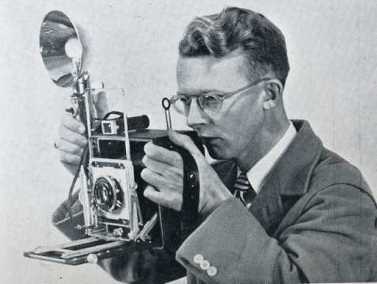 Remember that this was an era before Liquid Paper. Imagine all the retyping that had to be done. 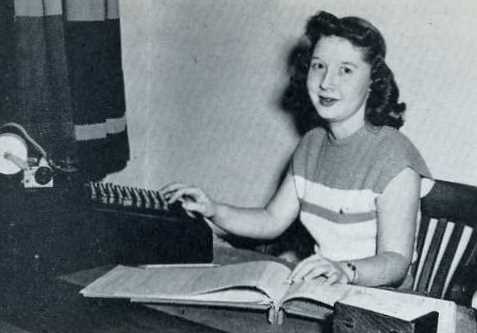 The editor proofs some copy, smoking what appears to be a redskin headdress feather, but may well be a blurry pipe. 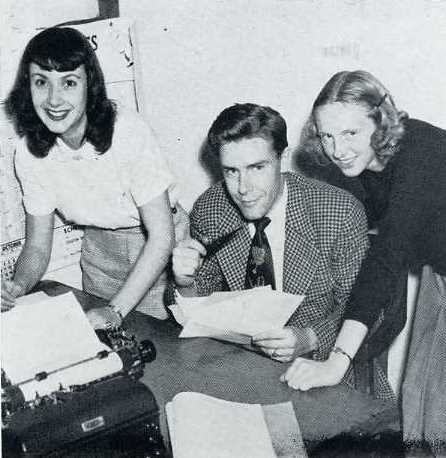 And check out the fly neckties on these fellows. 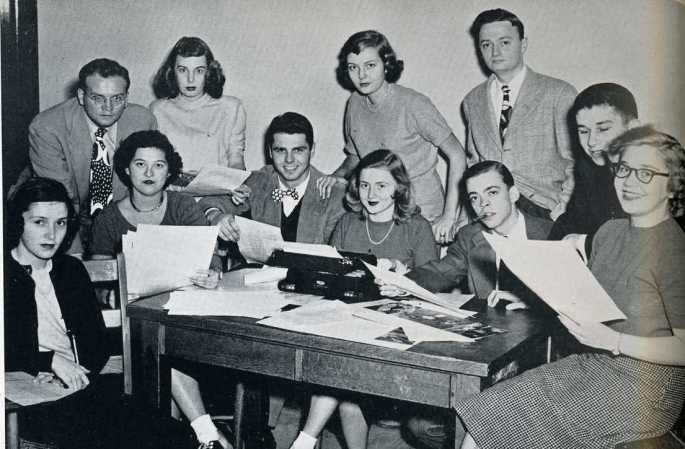 Cheers to the yearbook staff of the 1949 Recensio–may you all have your own blogs on WordPress, if you are still alive.

Part of the university experience is college ball, and Miami University is no different. Here comes the marching band, flanked by costumed Redskins.

And just watch how excited the crowds look this Saturday morning! How about that Christmas sweater smack dab in the middle?

How could they possibly lose with these guys on their team?

Let’s don’t forget about the ladies, getting their lacrosse on. 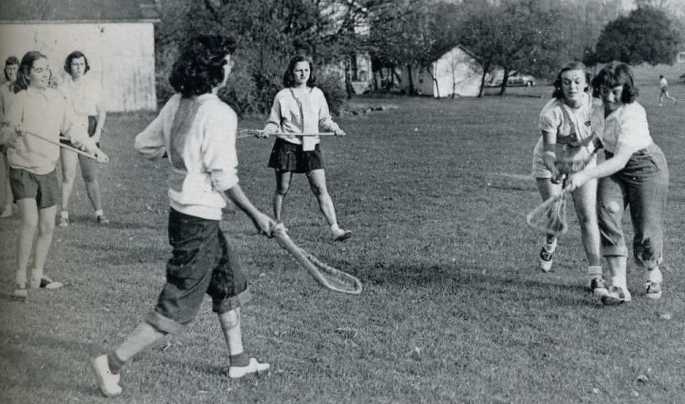 But some prefer to stay indoors and bowl in the air conditioned bowl-o-rama.

And certainly don’t mess with the gals on the archery team. They’ll shoot your eye out.

When you think of Miami, you probably think of Miami, Florida. I do. Or the Will Smith song that speaks of the coastal city. You probably don’t think of Miami University in Ohio, of all places, where this picture was taken in 1949. Here is a portrait of dorm life–before cell phones, before TV, before rock ‘n’ roll–where women could look attractive in penny loafers and saddle oxfords instead of 5″ stiletto stripper heels.

I’d never even heard of Miami University, the 10th oldest public university in the United States. The university, which offered classes in 1824, existed long before Miami, Florida was incorporated as a city in 1896. And that’s one to grow on!

These fellas seem to be enjoying campus life as well. They didn’t need no stinkin’ Blu-Ray or mobile apps to be content.  Just a book and a lamp and some swanky robes. 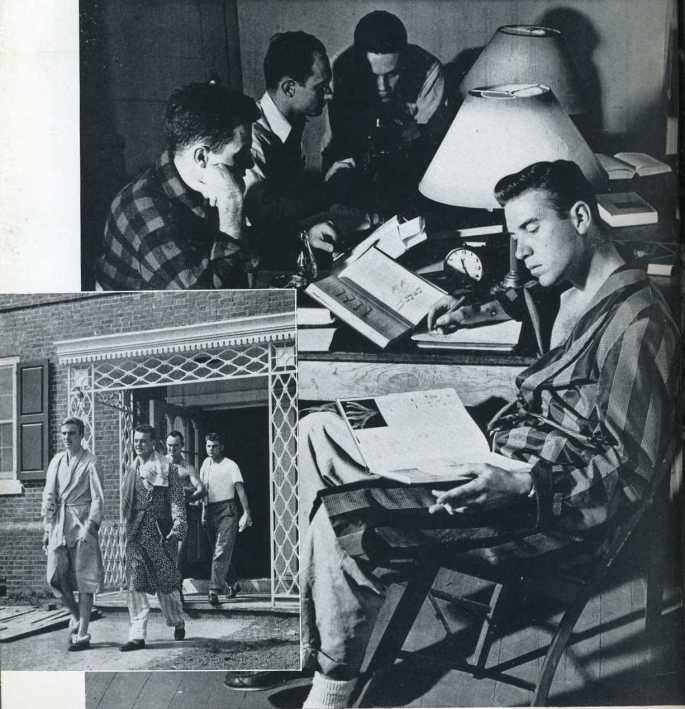 At the time, the mascot was the Miami Redskins, but a politically correct climate necessitated a change to the Miami Redhawks. Lame.

Back then, it was also cool to smoke, especially while sunbathing–or turning your skin red. Yes, I said it.

Nowadays, it’s inadvisable to start a family while in college. And who could afford it under this administration anyway? But in the post-war years, students were often married and raising families. And evidently living in ramshackle cabooses with picket fences built by unskilled laborers.

This next gathering is a group of gals in the “Outing Group.” It’s not what you think; they went on picnics and hikes together over frostbitten leaves. And apparently, they were keen on swastikas as well.

Perhaps after a long day of hiking and antisemitic rallies, the girls would hit the town. ( To be fair, swastikas meant “it is good” for years before the Nazi party used it. Let’s take it back, people!). Downtown Oxford, Ohio offered up restaurants as well as a movie theater.

The Miami-Western Theatre (oooh, the British spelling!) prided itself on being the only diversion in a “rather dull town.”

No worries if you spilled soda pop or melted Junior Mints on your glad rags at the cinema; you could just take them on down to Redskin Cleaners. 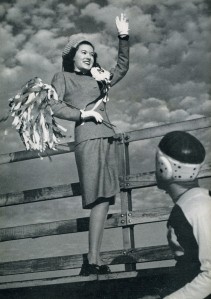 All hail Nikki Hendricks, the North Texas 1946 Football Queen.  Watch her ride “in royal splendor.”  I think we both know which one is Nikki and which one wishes she were Nikki.

And here is a rare shot of Tina Fey’s grandmother, Dude Neville McCloud.  That’s what it says, folks.  Click to enlarge if you don’t believe.

Note the publicity staff “during a busy hour.”  Mercy, how bustling.  The supervisor checks for typing errors while one girl evidently knits and glares.

Below is the W.R.A. tumbling team.  One of the support gals in the middle appears to have sprained her eye. 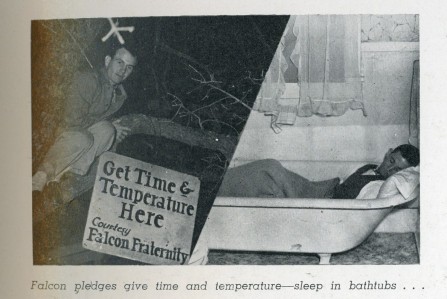 Oh, how I wish I could have been a Trojan’s date to the Sadie Hawkins Dance.  The one with the eyebrows, sitting on the haystack. 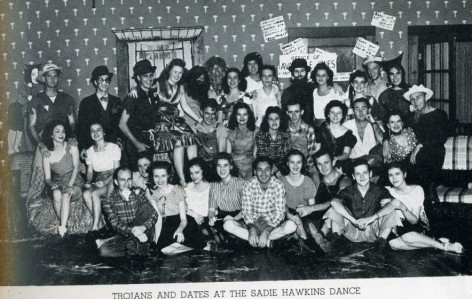 Let’s end with this portrait of the Baptist Student Union Council.

Just take a moment to really absorb the Doublemint Twins in the front row,  Yes, F. Day and J. Day.  Perhaps it was in honor of D-Day and VJ-Day?   You can see the disdain all over F. Day’s face.  But J. Day.  Oh, J. Day.  She looks like she smelled a fart.

Now look to J. Day’s left.  Another set of twins!  Dang, Baptists!  Way to be fruitful and multiply.  Janel and Janet Barr.  I know, super creative, right?  You just KNOW people rhymed her name with “channel” instead of the exoticish J’Nelle. That’s why Janel is fidgeting with her fingers. In the twin crapshoot, she got the bad name.   And Janet is so over this.  She threw off her jacket in a fit of rage only moments before the shoot.  She’s all Oh, yes, please let me dress in identical clothing like those damn Day hussies.  Like we’re toddlers.  As if.  Can’t people SEE we’re fraternal?  Look at her.  I bet she wasn’t Baptist for long.

Today we’re going back to 1947, to a post-war era at North Texas State University, when women looked like the Andrews Sisters and frat boys took preventative measures against osteoporosis.

I love the pretty print dresses on these ladies. 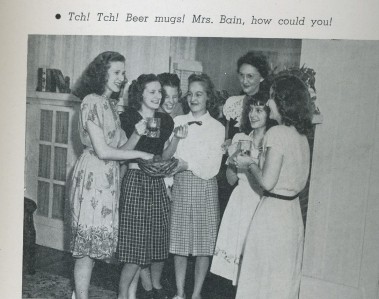 Even just one row from the yearbook can reveal a lot.

Let’s hope for his sake, that “Dwyane” was misspelled.  But check out his two-tiered locks.  And what about John’s tousled look?  Sexy.  I’m certain he knows his way around a tractor. And Fred’s sharp threads are pretty snappy.  I’m afraid these ladies’ names have gone by the wayside.  Any preschools catering to Margie, Betty, or Ada Jo these days?

Yes, Virginia, there was life before iPods and iPads.  Youth culture existed free from technology.  Before Supercuts and Starbucks, there were barber shops and coffee shops.  Look at that TEENSY coffee cup!  No blue tooth in sight.  People were actually looking UP.

Such was life in “Collegetown.”  Stay tuned for Part II!

If you know those lyrics, you should be clapping your hands together right now.  The Steve Miller Band’s “Take the Money and Run” topped the charts in 1976, and that’s our focus year today.  I was flipping through a 1976-77 University of Texas at Austin Cactus, one of many yearbooks in my collection.  What struck me the most was the level of unkemptness.  If that’s not a word, I hereby decree it is now.  Everything looked chaotic, in need of antiseptic wipes, hairbrushes, and ironing boards.  The 1970s just needs a darn good scrubbing.

If you weren’t alive then or were too young to recall, let me offer you this glimpse into what life was like as a student in central Texas during the year before Elvis collapsed on the toilet.

During the bicentennial year of 1976, the presidential elections intensified between Jimmy Carter and Gerald Ford.  On campus, the Absurdist Group drafted an Arts & Sausages platform.  These are not typos.  Pictured is a rally for student government.

This next picture of student government (next to an icon of what appears to be Slash from Guns ‘n’ Roses, which did not exist yet) shows bralessness, early male pattern baldness, and an overzealous male giving the “Hook ‘Em, Horns” sign.

Here you see a computer from the research department.  Fitting this on your lap at Starbuck’s was cumbersome at best. 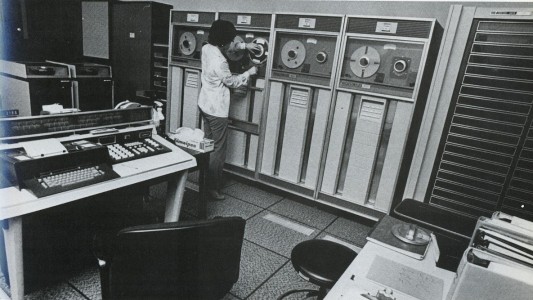 The Tavern was a great place to socialize and blow off steam, back when the drinking age was 18, which seems CUH-RAZY in retrospect–allowing high school seniors to be hitting the saloons.  But I guess if they were old enough to go die in Vietnam, they should be allowed to knock back a few gin and tonics before shipping out.

The pic is not askew.  The SEVENTIES were askew.  What is he looking at?  I’d say her chest, but her chest is identical to his.  Maybe he’s taking in the scent of her Ban Roll-On.

The Texas Tavern also offered bowling.  Check out the form on this hunk.

And no college bar is complete without its “Disco Night,” which showcased the talents of diverse DJ’s. 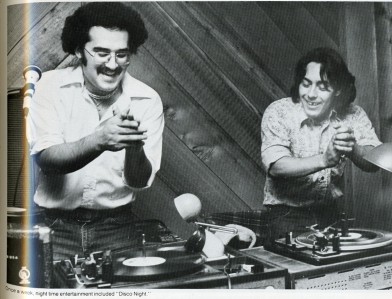 Below is a portrait of The Crow’s Nest, a group formed in 1949, open to any Navy ROTC Midshipmen with a 2.0 GPA.  The mission was to develop leaders and future Naval officers.  Per the yearbook, “the mascot is any likely sea bird such as the penguin or albatross.”  Was the entire yearbook staff stoned when they edited this? 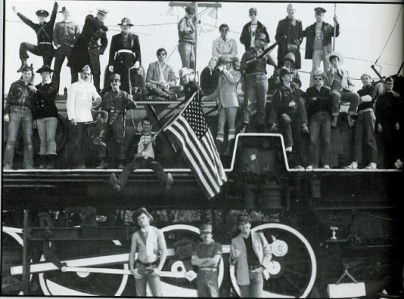 If you really peer into this, you’ll see not only the YMCA being performed, but knives and swords at each other’s necks, a man in aviator glasses, a Greek Fisherman’s cap, and a jogging jacket, a gentleman in a nice blazer and his underwear taking a swig from a bottle, a cowboy taking a hit off a fatty–not to mention Los Tres Amigos at the bottom.  Mercy.

Frat life seems much more tame by comparison.  Note the gender roles being broken down as Wayne prepares a pot of chili for Wendy (whose Farrah Fawcett wings seem to be experiencing an uprising of their own).  How could she resist the charms of such a hairy beast and his blow-dried tresses? 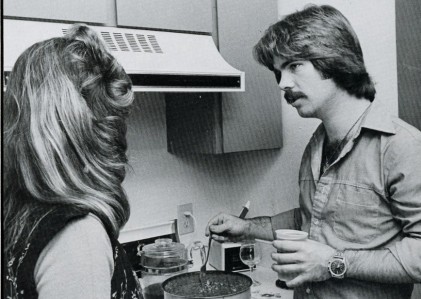 This next glimpse of campus life has no caption.  With the exposed brassiere, I can only guess that it’s a feminist rally gone awry.  We may never know. 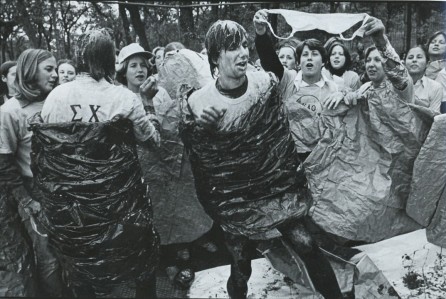 And so ends our window into the dirty grime of The Bicentennial.  Happy St. Patrick’s Day!