This ape found his Chiquita Banana. 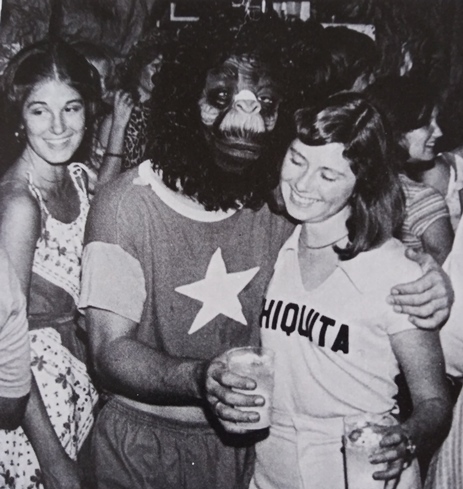 Although we bristle at this now, this was the reality of a 70s frat “Jungle Party” on 11/11/76. As Bob Wills says, “Time changes everything,” and we can see why. 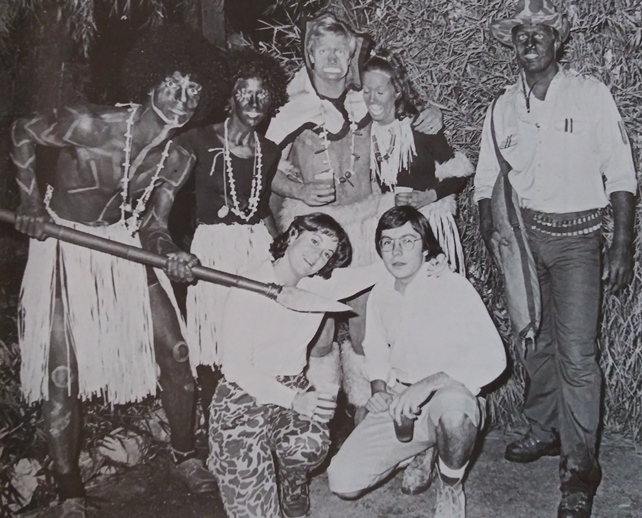 That’s the great thing about yearbooks; they never get re-edited. So while it reveals a context with which we might now be uncomfortable, it also shows us how far we’ve come.

Do you suppose it’s pantyhose on their faces, like robbers don? 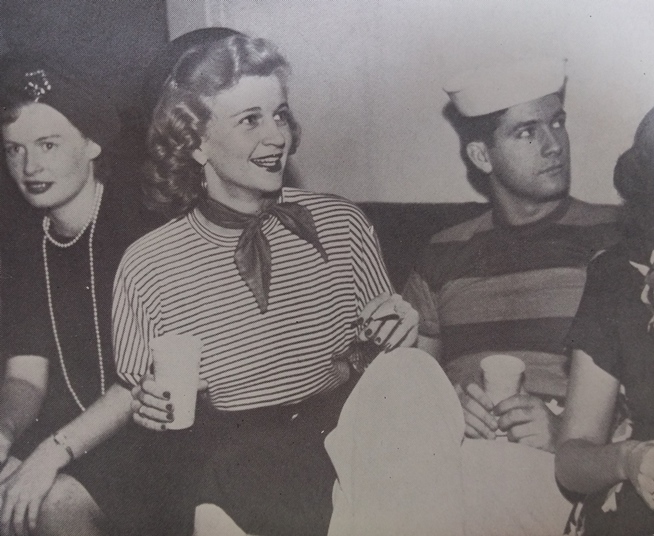 It’s Halloween of 1949 at the University of Texas at Austin, and Nautical Nellie is excited to see the ghoulish costumes of her peers. 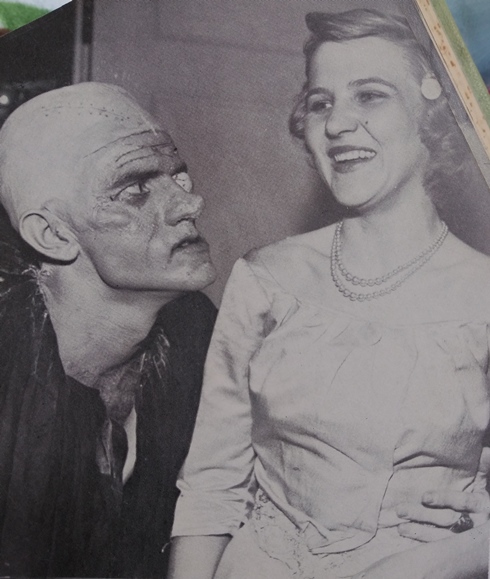 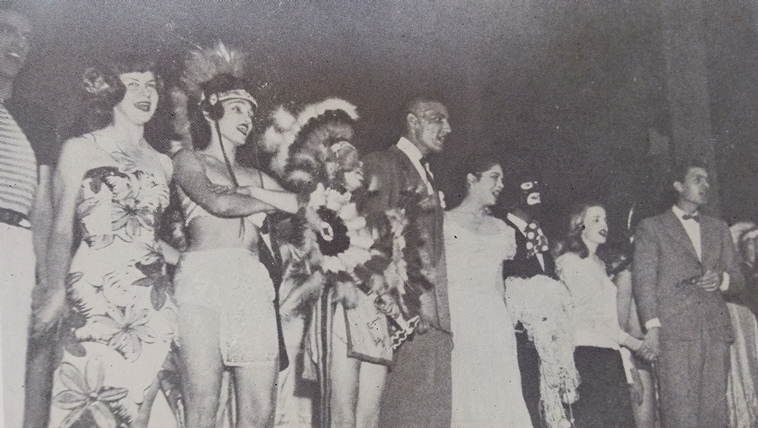 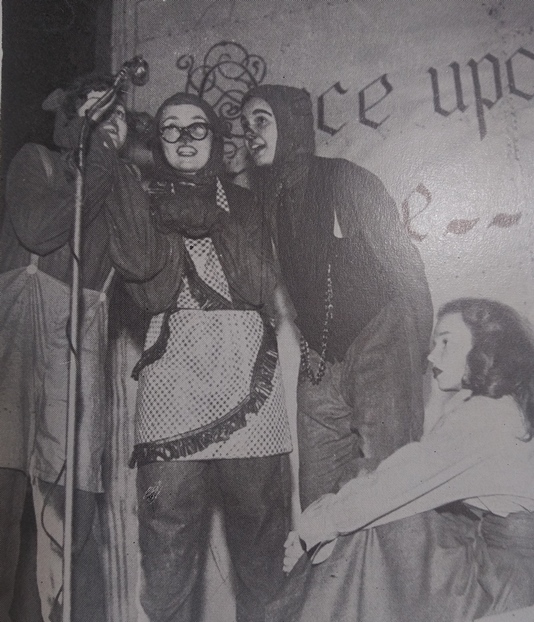 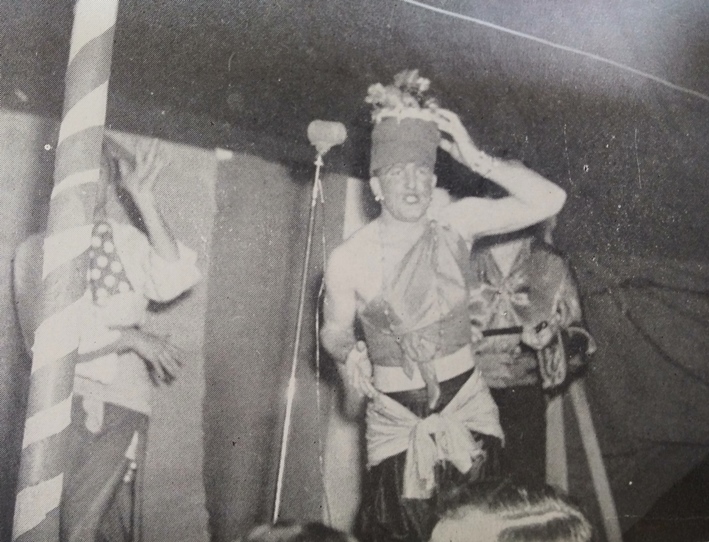 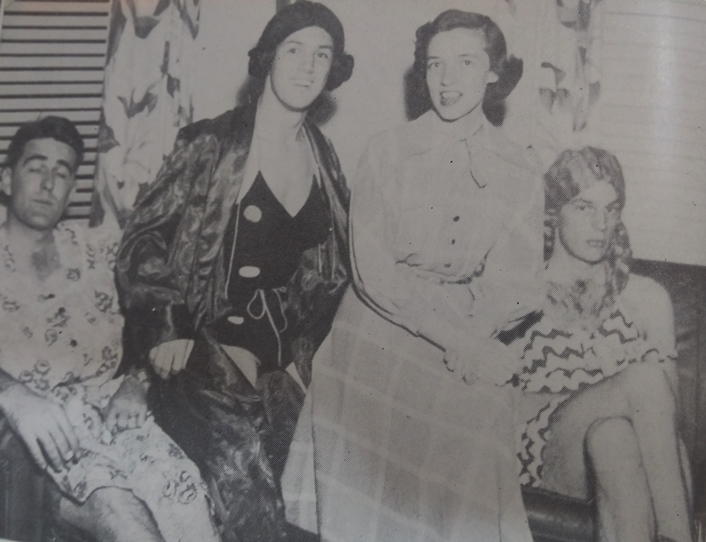 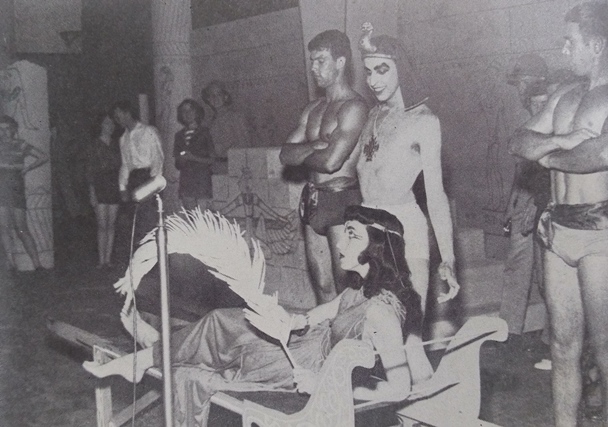 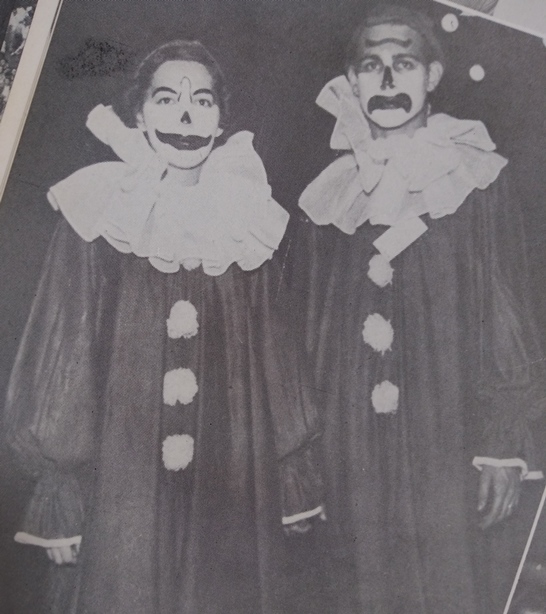 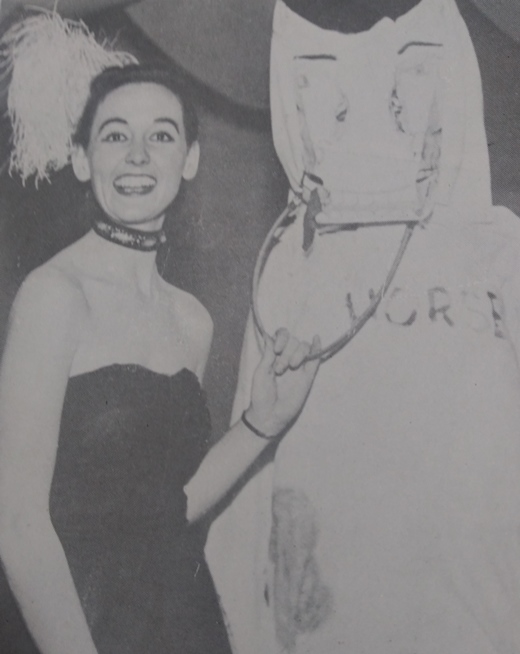 Just a girl and her horse. That seems normal, right?

Today we pay homage to the costumes of Old Sweden. The ladies above were from Rättvik, a Swedish lakeside locality adjacent to a bunch of words that sound like the Swedish Chef said them. They were waiting for a “conveyance” to take them back home. Who says that anymore? Probably not even the people of Sweden at this point.

Next, we see another three dolls, Dals to be precise, in Boda, a locality situated in Rättvik Municipality. Already, you can notice the Swedes liked red horizontal stripes, which flatter almost none of us. 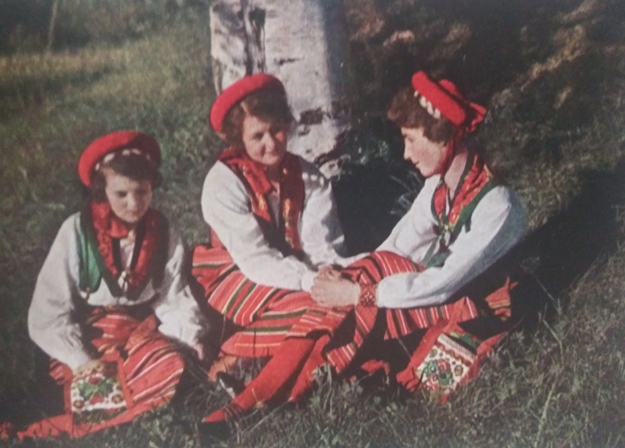 They were also fans of hats, as you can see in this next pic of a native of Södermanland, the duchy of then-Prince William. No, not that William. And no, not douchey, but duchy, which is a territory of a duke or duchess, or a dukedom. But not a dumb duke. 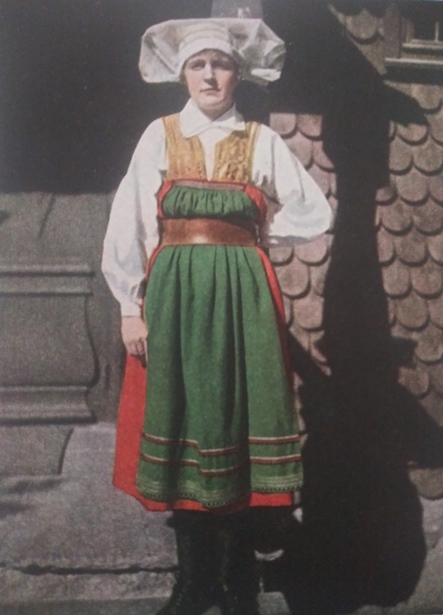 Speaking of fetching hats, this next trio sported three different variations. Mora’s hat, on the left, was “staidly Puritan.” Mora is a place, not her name. The middle girl, from Rättvik, wore a peaked cap with red stitching, perched atop the back of her head. The Leksand girl on the right wore a white cap only if she was married, and red if not.

Not to be outdone, men also sported old costumes and winter sleeping caps. 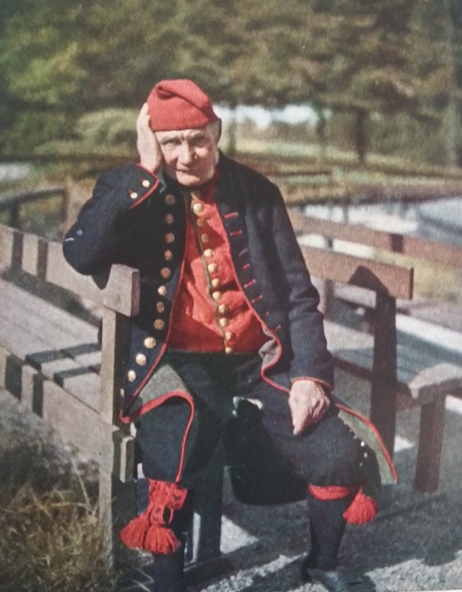 This bloke from Hälsingland is wearing something that reminds me of Rip Van Winkle. The quote below him says,

Therefore my age is as a lusty winter,
Frosty, but kindly.

Children were not immune from donning gay apparel as well, while the women of Lake Siljan held tools.

As you can see, they could not get enough red stripes. 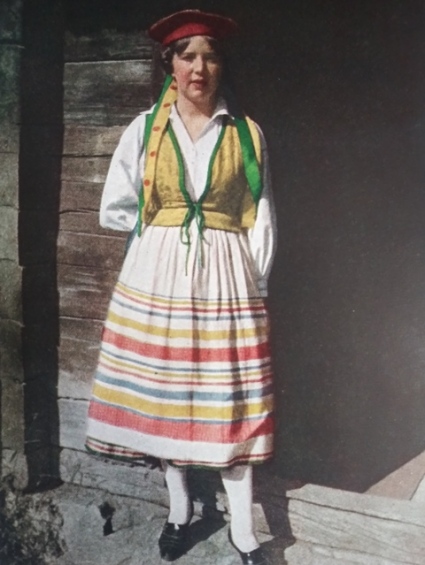 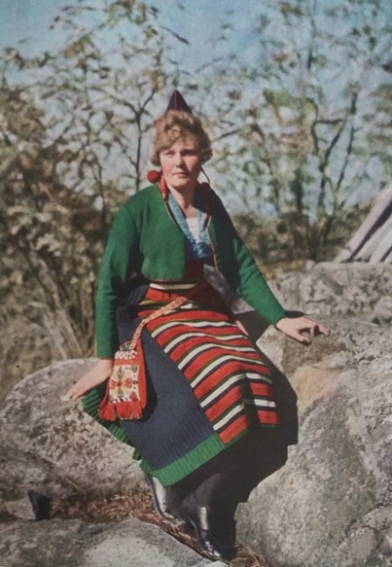 Rare were the outfits that strayed from the norm. But always, the head was covered. 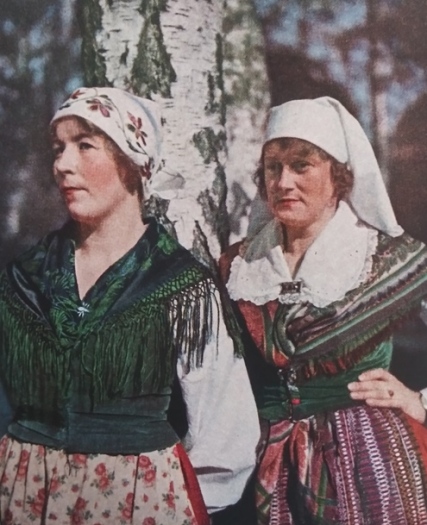 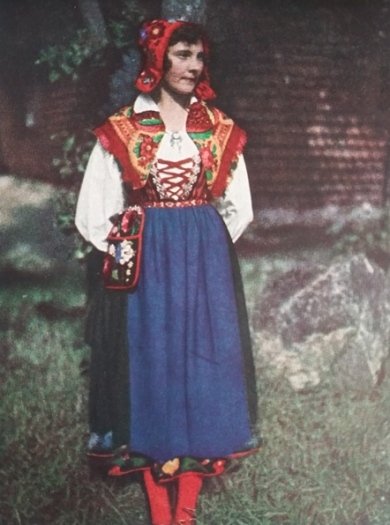 Two maids stood in the doorway of an old farmhouse at Leksand, one hopeful and one bitter. 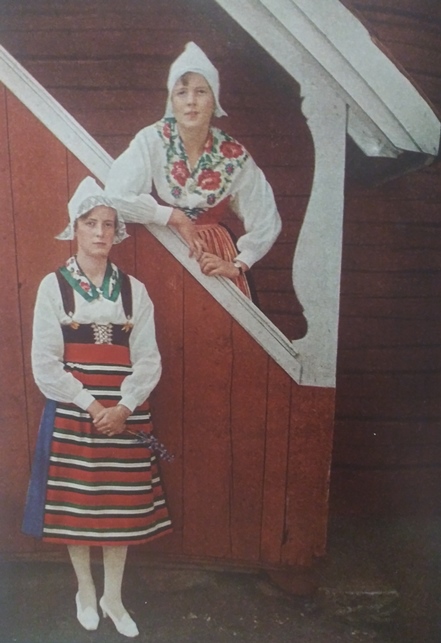 In modern-day Leksand, natives still sport traditional folk costumes as a nod to their past. Way to keep the history alive, ladies!

No, no, it’s not that! It’s two co-eds passing a lifesaver on toothpicks during Halloween of 1977. In fact, all of these images are of college students celebrating Halloween that year. Bless her heart… 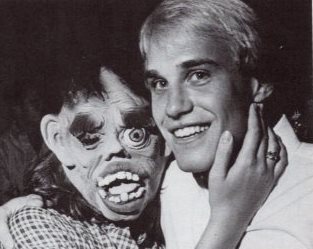 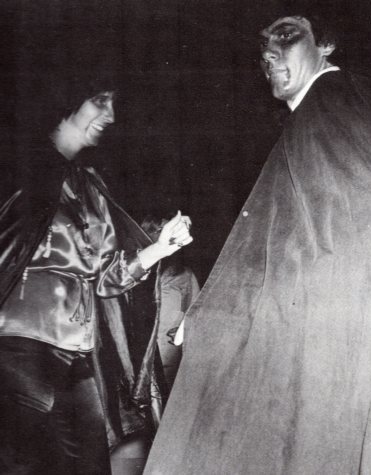 An ape loving his Chiquita Banana. 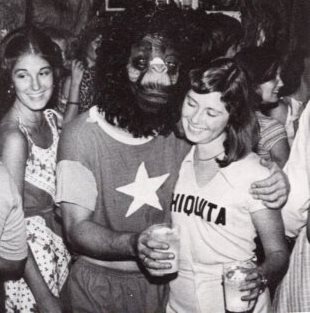 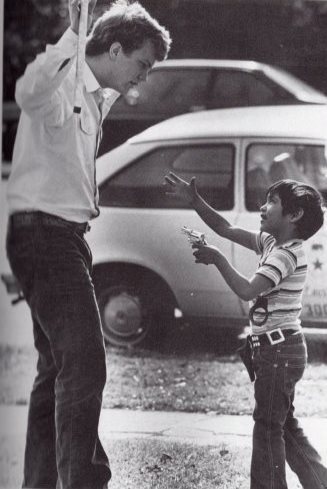 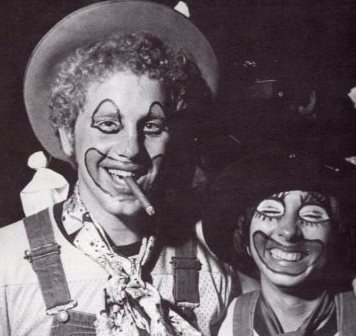 Members of Devo with a wooly beast. 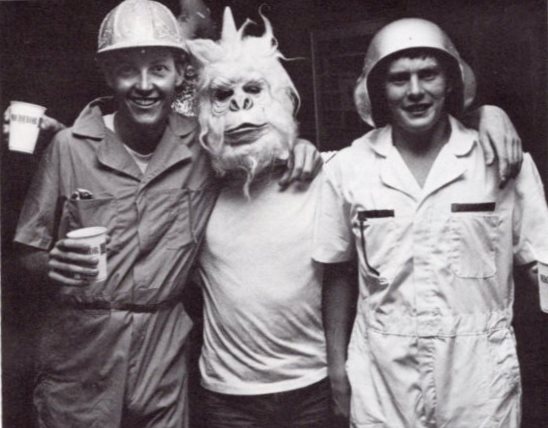 And who could forget Tarzan and Jane? 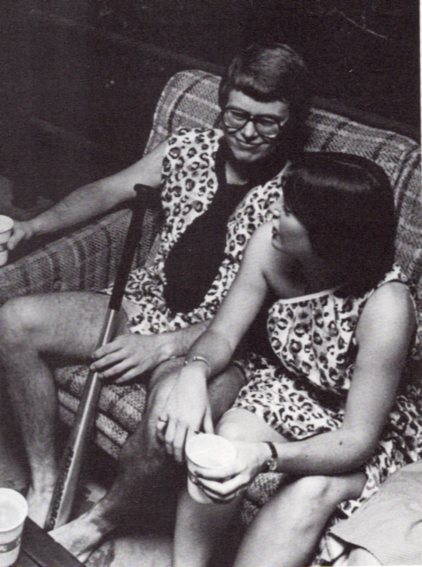 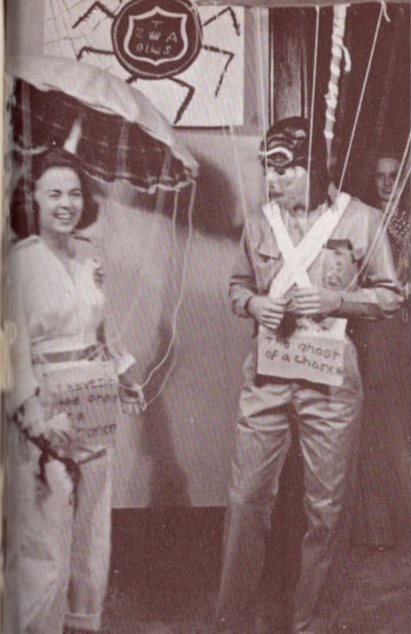 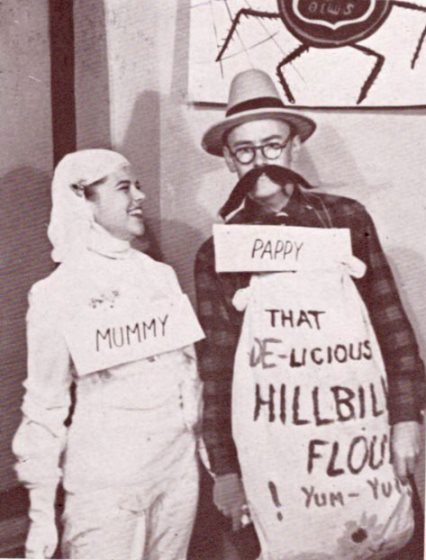