Crap Your Hands, Everybody!  Everybody, Crap Your Hands!   I think things were actually GAINED in translation.  Hopefully, a kind stranger will inform him what a difference a letter can make on his sweater that appears to have been stitched in the style of a Quaker.  But at some point, he can remove it and toss it in the Goodwill pile.  This lady is not so fortunate. 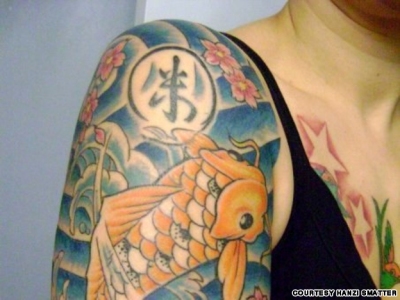 This pic hails from the Hanzi Smatter blog, dedicated to the misuse of Chinese characters in western culture.  The lady who owns this arm believed the Chinese symbol to mean “chi.”  Maybe she identified with the idea of vitality and life force and energy.  Well, it’s not chi, per that blogger.  Sadly, the symbol translates to “rice.”  Rice.

But not all is lost.  I mean, rice is still consistent with the Asian theme.  Toss it in with that eerie koi (not to be confused with Iriquois), and it might make a great meal!  Maybe she could stir fry it in a mild chili sauce and fresh orange peel, like P.F. Chang’s hunan style hot fish.  Yum!  As Winnie the Pooh says, I feel a rumbly in my tumbly.  Actually, it isn’t farfetched to be associating food service with this colorful sleeve, since the enormity of it excludes her from many upper level management jobs, save quirky ice cream and sub sandwich shops.

Should we cut her (and the thousands of others who failed to research the symbol they had permanently inked onto their skin) some slack?  I mean, there ARE 50,000 characters in the Chinese language.  One cannot assume that all tattoo artists are fluent, no?  And P.S., simply branding your arm with symbols does not automatically induct you into the spiritually enlightened hall of fame.  It doesn’t give you a rich tapestry of character and dimension.  Not all Chinese people do Tai Chi and catch flies like Mr. Miyagi, philosophizing near lily pads.  It doesn’t make you deep.  In the case of rice-girl, it just makes her ignorant.

So what’s the flip-side?  When Asian people see things written in English, do they assume it’s all trivial and frivolous?  Everyone knows Americans are fun and hip because we’re constantly shouting black music.  Even our President does it. 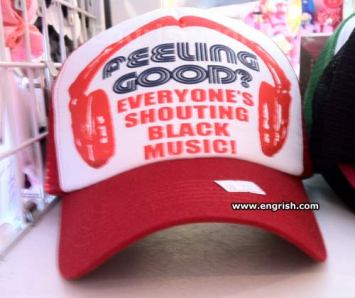 If you’ve ever made a trip to the Engrish site, you’ve seen how desperately Asian designers are in need of skilled translators.  But really, why would you walk around, wearing something that makes no sense?  How can you make a statement when you don’t know what the statement is?

Maybe they like America’s bold stance on immigration, so they put it on a shirt. 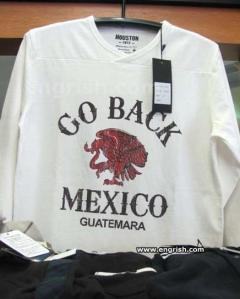 And who could argue that Pacino reeks of cool?  Even if he commands you to say hello to the bad gay…

And check out this question for the Creator.  Are you there, God?  It’s me Chao-Xing.

My bet is he’s at the nearest head shop.  Now this next one is complex.

First, and foremost, lollygag, unless it’s loitering in front of a 7-11.  Second, repeat a random Wilson Phillips lyric.  Next, the typical association of a foamy kitten and dwarf bravery, because those two go together like peanut butter and jelly.  I hate to admit that dwarf bravery has NEVER shone on me.  Not once.

Americans have spent so much time thinking Asian culture has the answers, but what if they think WE’RE the deep ones?

Hung in the sky blessing.  Need drift on the waves.  Preach it, brother, preach.  That reminds me, I need to rent “Point Break” again.

Who knew Americans had the secret of life?  We had it all along!  Honey Boo Boo and Mama June can testify.

Well, it is.  And it’s way better than crapping your hands.

Yeah, yeah–I realize this ad is old.  But it’s not old to me.  I grabbed a stack of old In Styles while at the used bookstore yesterday and this shot in a 2010 issue made me stop.  Not to collaborate and listen, but to wonder WTH?  Are her clothes in the bag?  Does her driver have a brush she can borrow?  Is she fresh from some coke-fueled rambage with ex, Pete Doherty?

This demands a caption contest.  I’ll start with the lamest one that dates me:

I pulled this ad out of my Vanity Fair magazine and set it on the coffee table for further inspection, as it seemed curious to me on several levels.  My son walked by and asked why a scorned Taylor Swift was lying near the remote and tub of coconut oil, and I explained that Miss Swift, fickle as she may be, is nothing if not ladylike–nay, princesslike–and would not be caught dead in a bedazzed jungle cat motif.

This honor goes to Karlie Kloss, the Juicy Couture model for the Fall 2012 campaign.  Now when I hear Juicy Couture, for some reason, the Brit’s voice pops into my head singing in her stilted robotic voice: I’m Mrs. Lifestyles Of The Rich & Famous (You want a  piece of me?) I’m Mrs. Oh-My-God, That Britney’s Shameless (You want a piece of me?).  No, thank you, we do not (and apparently, neither does Jason Trawick).  The point is, Juicy Couture brings to mind velour tracksuits.

So there we have a JC designer wedged between JLo and The (Green) Material Girl.  Are these the best examples of juicy derrieres?  One of them has an ample booty, and one of them has a boney booty, but neither of them can claim “juicy” anymore. Perhaps Madonna could suggest that her designer daughter, Lola, start a line of clothing for post-menopausal women, with a more accurate label.  Something like “Wither Couture.”

But back to Miss Kloss, the anti-withered.  In fact, she’s not even legal to imbibe yet, at least not in the States.  I’m no Anna Wintour, so I can’t tell you what they WANT this ad to say to the consumer.  But I can tell you what a common woman between the age of Britney and Madonna sees when she looks at this ad.

And just in case you missed the animal references, here she is ON ALL FOURS in a leopard-print jumpsuit hoodie monstrosity, cavorting on the sand after she had her Gatorade to rehydrate.  Who’s a happy girl now?  Who’s a happy girl?

More than anything, this reminded me of my college roommate’s cat, Misery, when she was in heat, rump raised and ready to rumble.  I think I’ll take my couture pulp-free this year, perhaps altogether juice-free.  Lola, have you got any etchings done yet?? 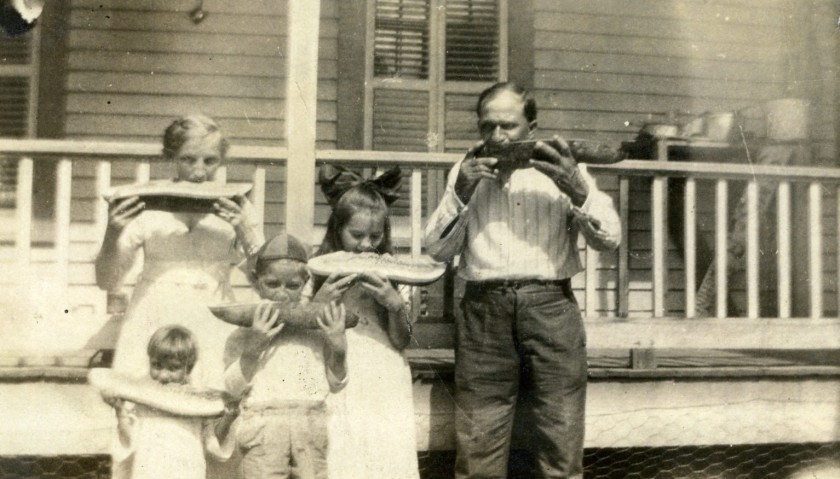 At first glance–this looks like a family of five enjoying watermelon, right? That’s what I thought. But the more I look at it, it looks like enormous Vlasic pickle spears, the kind that would go swimmingly with a pastrami on rye. But that would imply they had barrels to pickle what was conceivably the largest cucumber ever grown, so I’ll assume it’s watermelon.