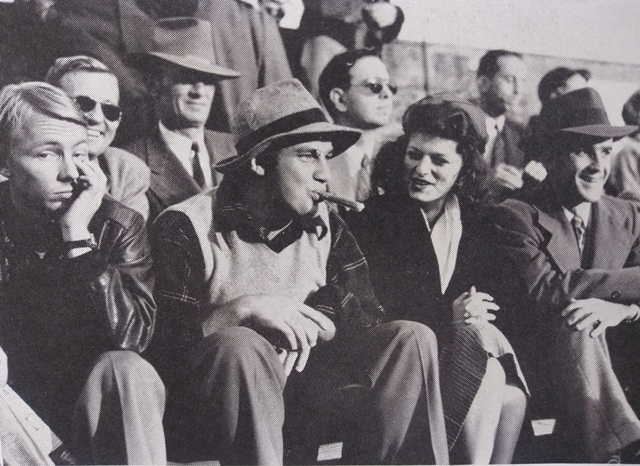 Resigned to a saltless week of empty timeslot.

This morning, I watched a clip of Rodney Dangerfield on The Tonight Show with Johnny Carson. I miss how late night shows showcased comedians almost on a nightly basis. Nowadays, most shows end with a musical act of which I’ve usually never heard–and which often leave me confused and with little faith for the future of the music industry. But back in the day, comedians were in demand (you couldn’t throw a stick at a screen without catching a stand-up routine and a brick background), and Rodney’s style was a machine gun delivery. You barely had time to process one joke before he hit with another.

All this led me to the Tuesday trivia tidbit that (as reported in 2007) Dangerfield tattoos are among the most popular celebrity tattoos in the United States. That struck me as odd, since he passed in 2004, and he peaked in the 80s. But check him out on what appears to be a young calf.

Maybe Dangerfield was a leg man, as he appears on many of them.

Here’s another variation of the same image, with the handkerchief applied to the face (like he’s sweating mid-panic attack).

He also made an appearance on a shoulder blade in the montage with fellow funnymen Sam Kinison, Benny Hill, and W.C. Fields.

It just seems an odd choice in a world full of Marilyn Monroe and James Dean tats, to ink your body with the face of a middle-aged Jewish man, aka Jacob Cohen. Then again, no one would recognize a tattoo of this young man.

Actor-comedian Joe E. Brown gets toweled off by wife Kathryn at his Brentwood home in 1951. She doesn’t seem to mind his toned 60-year-old physique. The two were married 55 years until his death in 1973.

He was one of the most popular American comedians in the 1930s and 1940s, with successful films like A Midsummer Night’s Dream, Earthworm Tractors, and Alibi Ike. In his later career Brown starred in Some Like It Hot (1959), as Osgood Fielding III, in which he utters the famous punchline, “Well, nobody’s perfect.”

Can you tell who the woman is here with him? I’d recognize her anywhere.