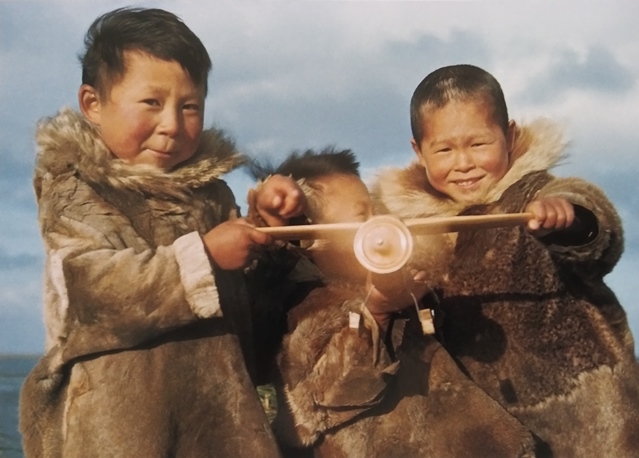 So go the words of this 1947 National Geographic article. Seems pretty cut and dry to me. But evidently we’re not supposed to say “Eskimo” anymore; Eskimo is considered offensive, especially in Canada, being widely thought to stem from a Cree pejorative meaning “eaters of raw meat,” which is precisely, accurately what they are doing in that very image. So I don’t know how that is offensive. But in this day and age, isn’t everything?

Demeaning any group for their race or heritage is clearly wrong, but good luck staying abreast of all the latest victim classes and subsequent acceptable language. It shouldn’t be too hard to avoid the E word if you live in a non-igloo location. Is it okay to say “igloo”? Will the judge allow it?

I DO know this is racist:

Absolutely. I get it. Demeaning.

But this next ad from 1958? All I see is a cutie patootie selling me delicious chocolate, which I imagine is waaaay better than frozen caribou. Is there a word for “middle-aged eater of chocolate”? I’ll take it! 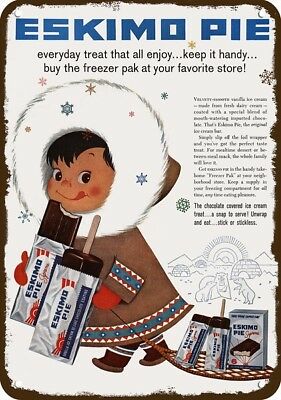 There isn’t any hate behind this ad that I can see. But some folks will go looking for it, scavenging for it, desperately trying to find malicious intention. Cute kids sell ads. Always have, always will.

In 2016, then-President Obama signed legislation that replaced Eskimo with “Alaska Native” in federal laws because Non-Inuit people had assigned the term. Isn’t that what all language does? It assigns terms? I guess I just don’t get it there. Does that make people feel like they’re taking their power back if they get to change the language?

So what about Eskimo kisses? Is that okay to say? Is it okay to do?

Is a Native American eskimo-kissing a white male offensive? (If I am to assume she is even Native American based on looks). The boy-child Peter Pan is culturally appropriating a Native American headdress, and that is in the “no-no” column these days. No race is ever allowed to wear anything that another race has ever worn; that is theft, plain and simple. But what if you’re many races, like many of us? A dozen different results from Ancestry.com? Can you “appropriate” the customs of any of your ancestors and don the gay apparel of your forefathers? Or should I say foremothers? Well, that gets tricky. But let’s be honest: even though she is literally pushing him back, he is metaphorically pushing her down both by being white and male. And immortal.

This 70-year-old National Geographic states that the thigh panel on tight sealskin trousers are “a fashion must in Greenland.” Composed of bits of brightly-dyed leather in mosaic patterns, they add pop to any thighs, and compliment the two pounds of beaded collar forcing their shoulders down.

These Eskimo women are cited as Angmagssalik in the article. That’s a rough word, folks. You know how it’s Istanbul, not Constantinople nowadays? Well, in this case, it’s Tasiilaq, not the antiquated term Angmagssalik. So Tasiilaq it is!! If that’s too much for your brain on a Tuesday, I feel you.