Miss Lesley E. Bogert strides with purpose through a parking lot of curvaceous vehicles, off to cavort among fellow Newport socialites of the 1930s. Her father, Beverley Bogert, was a prominent New York banker.

This article from the April 14, 1935 Daily News gives the deets on her relationship with Russia’s Prince George. Note how she is described as “apple-cheeked, plump and roly-poly,” which seems inconsistent with the image above. 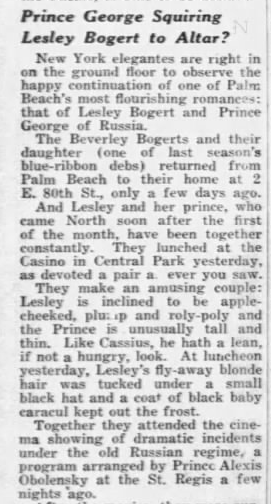 By the way, “caracul” is an Asian sheep with a dark curled fleece when young. You know, like most of us wear.

4 thoughts on “Packing Some Heat”