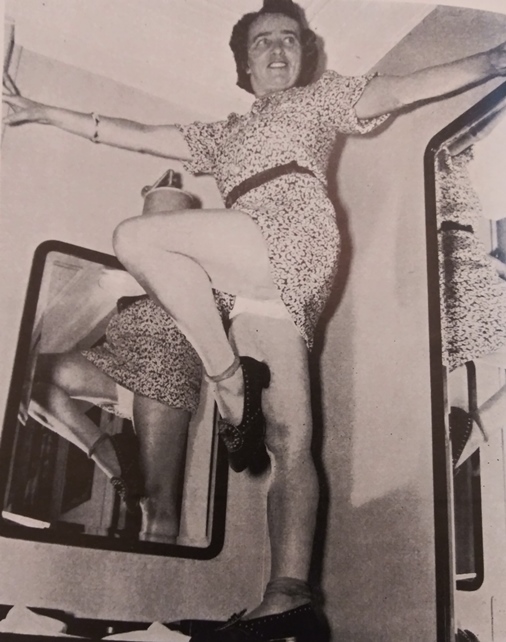 Oh, y’all. How do I tread lightly on this image? My first inclination was to Google the opposite of eye candy, which returned “butt ugly.” Honestly. While I feel that is harsh, my eyes nod in accord with Google. These are skivvies best left unseen. It’s curious that LIFE published this at all, in their 7/11/38 issue, referring to Emmy Andersen (whom you will not find made mention of anywhere else on the interwebs) as a “calisthenist and premier nudist of Denmark.” By the way, if you again Google calisthenics, the example it gives is, “Three women swung Indian clubs while performing calisthenics in unison.” That’s weird, right? It’s not just me?

LIFE went on to explain that Andersen had been a solo nudist on a North Sea island for seven years because Denmark frowned on organized skin culture. Don’t Google that term, because it means something else entirely. She arrived in the USA on June 30th to “ascertain the status of nudism in America.” One wonders what she discovered, or when she returned to her homeland, which declared neutrality the following year, and was quickly occupied by the Germans. I, however, am not a Dane, so I don’t have to be neutral. To the exhibitionist with the nylons rolled down, I give a decided thumbs down.