When we studied WWII in middle school, I remember trying to wrap my head around the murder of six million Jews. It was a number I couldn’t fathom. I currently can’t imagine having a million dollars, and I can’t process that there are over a million people in my hometown now. It’s still too big of a number for me. So when we think about the estimated 26 million Soviet citizens who died during WWII (according to the Washington Post), it’s mindboggling. Can you process that number? There are only 25 million people in all of Australia right now. Less than 26 million in all of North Korea. Can you imagine just annihilating that many folks?

And the men above were spared. Survivors of forced labor camps with nothing to their names. What a hard road that must have been to travel.

Per a January article about Soviet slavery in Russia Beyond:

“They crammed us into wagons, as many as they could, so we couldn’t move our legs,” recalled Antonina Serdyukova, who was captured in Ukraine. “For a month, traveled that way.” Describing her life at a plant near Dresden, she said, “We ate once a day, a bowl of soup, with carrot and swede.”

For the Ostarbeiter (“workers from the east”), forced to live thousands of kilometers from home, fate was like the lottery. Metallurgical plants, mines and farms needed workers, and where they ended up depended on who paid the most.

“When we arrived, there was a transfer point, I would call it a slave market,” said Fedor Panchenko from Ukraine. “In an hour, they sold the whole group of people to different hands.” Among a group of 200 people, Panchenko found himself in a factory, at the ironworks in Silesia (now Poland). For those who came home, life was also hard: German captivity was a stigma. “Fellow citizens despised us,” calmly recalls Panchenko. “I couldn’t apply for a decent job and spent 37 years working at a factory, and if there was any kind of breakage, they would say to me each time: “Oh, no surprise, you worked for Hitler.” Others kept silent about their experience in Germany for decades – they didn’t want the stigma to impact their careers or families.

Members of a Moscow polar bear club tempt frostbite on their toes while preparing for a dip in icy waters. 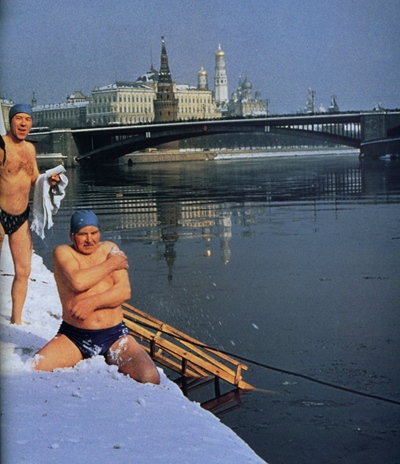