It’s chock full of stories, poems, and pictures by dead people.  This groom looks rather serene on his honeymoon.  He basks in the memory of the previous night, while she chooses which add-ins to order for her three-egg omelette.  Sounds about right. 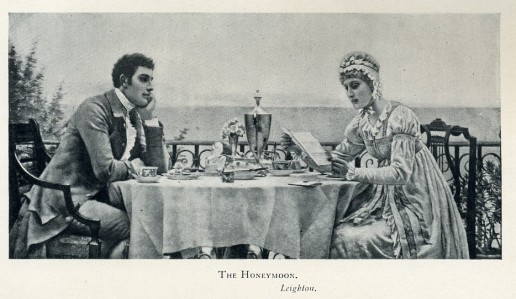 Included is a Poe poem (aha! one letter’s difference!), which inspired the post title.  No, I don’t know what it means.  If I did, my blog would be called, “I Very Much Get It.”  Clearly, I do not.

I also don’t get why this painting is titled “Bringing Home The Bride.”  Whose home is this?

Pardon me, but why are there old people at her home?  Why is that septuagenarian helping the bride disrobe in front of her grandpa?  Children at bay windows are witnessing this!  Gossip is being told to Teddy Roosevelt.  Men lifting suitcases on the staircase should mind their own business.  Truth be told, the departure from home seems much more lively.  Perhaps she should continue departing.

This volume also includes the courtship of not Eddie’s father, but instead, Miles Standish.  I particularly enjoy this line:  “She could not walk, he said, through the dust and heat of the noonday; Nay, she should ride like a queen, not plod along like a peasant.”  I hear that.

And what do you think of this? 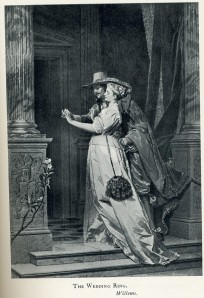 This couple gazing admirably at her ring–it’s very sweet, isn’t it?  And who wouldn’t be excited to be engaged to the fourth musketeer?  FYI, musketeers protected royal families.  I wonder if the little babe of Windsor, soon to be birthed, will have its own private musketeer?  No, wait, that’s only French royal families.  Nevermind.

Here is an excerpt from The Bride of Lammermour: 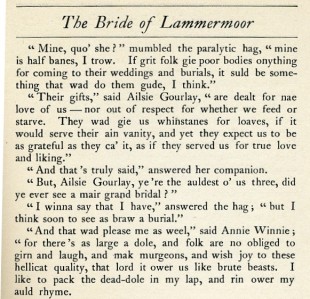 Oh, my gosh, you guys.  Don’t you HATE reading dialect?  What the what?  How am I to comprehend the mumblings of a paralytic hag?  As if.

Now I thought Romeo & Juliet were supposed to be about fourteen years old.  Romeo looks considerably older than that in this picture.  Like he could possibly see rated R movies.   I think we all know what happens next. 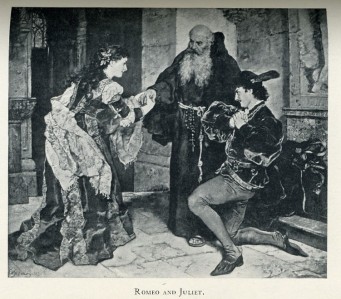 And here we are at the precursor to Say Yes To The Dress. 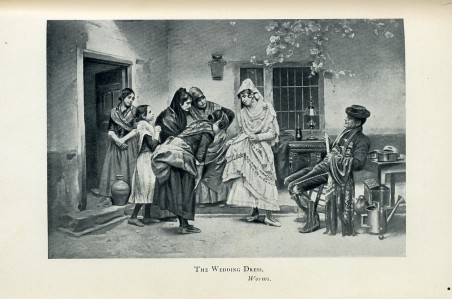 Is that guy the tailor?  He seems pretty smug.  Or is that the groom?  If so, he shouldn’t be seeing her before the wedding.  He’s quite the dandy, no?  And what’s with the girl?  Is she praying for a similar dress one day or already consumed with thoughts of the reception playlist.  “Please play ‘Celebrate’ by Kool and the Gang or I shall just die…”

Read this ditty, and you may be disturbed, and I don’t mean by heaving breasts. 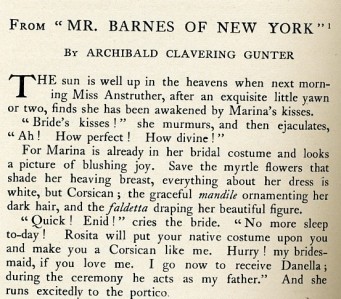 I would have had a heaping helping of sassy backtalk from my bridesmaids, should I have forced them to become Corsican like me.  Yeesh.

It takes a village to make a wedding. And a nice top hat.

And don’t kid yourselves, ladies: