It’s 1936, and these members of the Young Fascists are killing time and facial hair while hanging at comrade camp in Rome. At the time, Mussolini was head of the police state of Italy as its Fascist leader. Fascism is generally a one-party, anti-democratic, often racist dictatorship, so you can imagine the experiences these lads had living under such a regime. Note the painted Fascist badge on the truck above, derived from ancient Rome’s fasces, or symbol of authority, a bundle of rods with a protruding axe blade. Mussolini was evidently the axe.

Mussolini made his intentions clear from the start, before he became Il Duce.

When dealing with such a race as Slavic—inferior and barbarian—we must not pursue the carrot, but the stick policy … We should not be afraid of new victims … The Italian border should run across the Brenner Pass, Monte Nevoso and the Dinaric Alps … I would say we can easily sacrifice 500,000 barbaric Slavs for 50,000 Italians …

He intended to brainwash the minds of the young men below. Here, they are doing a drill at a camp, to which they came from all over Italy, for a review by Mussolini himself, as part of the organization’s sixth anniversary in October of 1936. 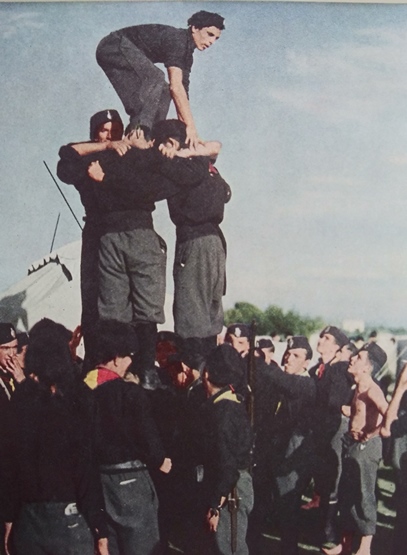 Mussolini equated high birthrates in Africa and Asia as a threat to the “white race,” which led him to ask, “Are the blacks and yellows at the door?” to be followed up with “Yes, they are!”
Below, Romans swarm the Piazza Venezia, so that Premier Mussolini can review the Fascist University Groups, wearing bright neckerchiefs, from his headquarters. The review commemorated the 14th anniversary of the Fascist March on Rome, when Il Duce came to power.

Opera Nazionale Balilla (ONB) was an Italian Fascist youth organization functioning between 1926 and 1937, which took its name from Balilla, the nickname of Giovan Battista Perasso, a Genoese boy who, according to local legend, started the revolt of 1746 against the Habsburg forces that occupied the city in the War of the Austrian Succession by throwing a stone at an Austrian soldier.

These Balillas, aka “boy blackshirts” emulate the posture of Il Duce, with squared shoulders, chins high, quickstepping with toy rifles and blanket rolls during a review.

Even the very young were indoctrinated.

Italian boys donned uniforms at six and received real weapons in their 18th year on the anniversary of Rome’s birth, April 21. These youngsters are doing a drill with gas masks and miniature rifles.

Fortunately, Italian partisans executed Mussolini two days before Hitler committed suicide, dumped his corpse in the Piazzale Loreto, let folks kick and spit on him, then hung him upside-down from the roof of an Esso gas station. Civilians were then allowed to stone him. Woot.