An American Red Cross worker is snugly sandwiched between two soldiers in a requisitioned vehicle, as a Berlin traffic policeman directs them during a sightseeing tour.

These hungry little tots are lined up for hot soup at one of the many Berlin soup kitchens. The feeding program began in November 1945, just months after WWII ended, seeking to aid the diet deficiencies incurred by the kids.

The caption on this next National Geographic image read Berlin Still Has Sidewalk Cafes, But Little Gayety. The glum faces in this British occupation zone belie the fact that it was, in fact, Easter. This wide strip of the Kurfürstendamm, the famous avenue in Berlin, was once well-known for shops, cabarets, cafes, and dance halls. Here, patrons drink imitation fruit juices and “ersatz” coffee, as there was no access to fine wines and liqueurs of yore. 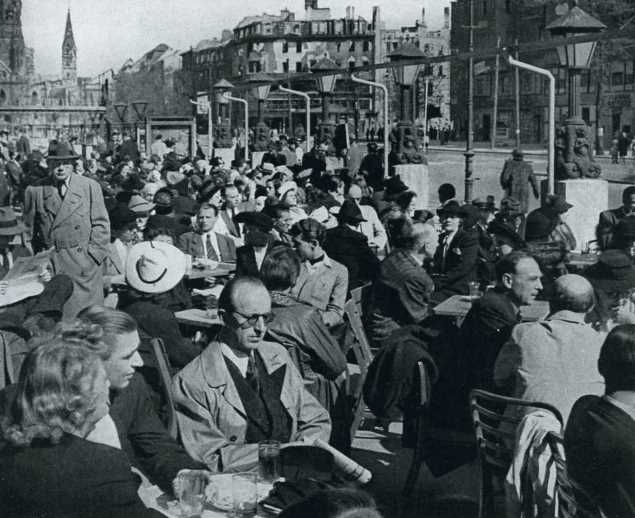 For a larger dose of fun and frolic, Allied-victorious American soldiers made the six hour trek south of Berlin to Garmisch-Partenkirchen, where they spent hours on the slopes.

Who could blame them?