If you’ve been a longtime reader, you may know that I sometimes jog. I’ve endured 20+ years of back pain, and the docs advise against it, but sometimes I just need to pound that pavement to clear my head. If you’ve got some extra time today, please enjoy these ramblings of a suburban jogger:

I pull my curly hair back in a denim scrunchie and pop a visor on my head. I haven’t jogged in over two weeks because my left heel throbs non-stop. It feels like someone’s holding up one of those lighters at a concert, but under my heel instead. It hurts to put any pressure on it, but NOT jogging hasn’t helped, so what the heck. I like to get out the door by 8am, but that just doesn’t happen today. So just past 9am, I lace up the Asics (which teens call “Dad shoes” FYI) and hit the pavement. Ah, yes, my friend, Shooting Pain, joins me immediately, and I give her a nod, for she is familiar and expected. She travels from my heels to my hips and likes to make it interesting.

What a difference an hour makes! What a difference a day makes… Sorry, my head is always full of song lyrics. An hour really does make all the difference in the world. An 8am jog has the sun at the edge of the sky, rising higher with the possibility of the day. At 8am, cars and school buses sit bumper to bumper as I jog in and out of school zones, past people in a rush to begin their day, listening to radio talk shows and forcing overpriced Seattle java down their gullets.

But the 9am jog is a different breed of cat. Rare is the car that passes by. The kids are all in school. The adults are all in fluorescent cubicles, counting down the minutes till their morning coffee breaks. How long till I can escape? Is this what I went to college for? Why did I bother? Why does college cost so much now? Who the hell can afford that? Why is a semester the same price as a year’s salary? How am I gonna put my teen through college? Good Lord, how am I?

I shake Satan’s voice off. He comes at me hard, especially in the quiet moments of a jog. He’s always loud and persistent and drowns out the Lord. I think about how if I were a Christian songwriter, I would write more songs about telling Satan to step off. Less “Spirit in this place, fill me up with Your holy holiness” and more crushing of my stiletto into Satan’s reptilian head while the blood spurts out and the enemy is vanquished and victory is mine, so saeth the Lord. But that doesn’t make the Billboard charts like contemplative “make me clean again” songs. Guess I’m in the minority.

It’s mid-May in Texas, so it’s already in the 90s, and it feels like that underworld down below. I’m sweating in two minutes, before I even hit my subdivision sign. My pricey HOA fees have made it possible for this fresh mow job that’s just been done. The grass is as tight as a moon mission astronaut’s hair, a veritable acre of crew cut. I imagine what it would look like if we ever had measurable rainfall around here, how lovely the grass could be if rain ever actually fell out of the dark clouds that always pass us by, as though this town were the ugliest hooker on Rundberg Lane, constantly passed up by sugar daddy rain clouds.

I can smell the syrupy blossoms dangling from tree limbs that really should have been trimmed from a public sidewalk. I exchange glances with the blooms, as if to convey that although I acknowledge their presence, we both know they will be withered and dead by the first of June, and all will be brittle and brown till October. Texas summers bite. I feel the heat bearing down on my skin. I can either douse myself in sunblock that spills down my forehead and stings my eyes or use that crappy Walgreen’s glue stick or the spray that tightens the skin up like pursed lips. I hate sunblock but I also I hate blotchy brown patches that appear literally by the minute as the sun beats down on me. But, whatever, my glory days are gone. Bring on the nursing home forearms.

As I near the bridge, I notice it’s, as-ever, covered with shards of brown glass. Why is every bridge covered in brown glass? Are bridges magnets for drunks who happen to have beer bottles at the ready? Have you ever thrown a bottle out a window? Is it that exhilarating? I’ve never thrown anything out a window, but that’s because I was always told not to mess with Texas. I look up from the glass, and a truck with a county sticker comes around the bend, with a smiling red heeler in the truck bed. The driver waves at me, and I wave back. Twenty years ago, there were honks. Now there are encouraging waves, as it to say, “You go, chunky Gen Xer. Keep it up. You can do it.”

I can’t keep up this pace. I don’t know if it’s the heat or the humidity or the fact that I’m middle-aged and corpulent, but my heart is beating tip-top at the apex where my stationary bike would be flashing little hearts on the screen to show me I was in the zone. The target zone or the stroke zone? I don’t know. I pass the middle school track with no kids in navy shirts and shorts, as per the usual. They’re all gone today. Instead, there’s a bulldozer and a handful of laborers, shoveling dirt along the trackline. Another job I wouldn’t want.

I pass piles of pink primroses and Indian paintbrushes and think about how those are some of the first memories of childhood in Texas. Bluebonnets and Indian blankets lining the roads, scrubby mesquite trees and acres of live oaks. Nobody could argue that an oak tree is prettier than a pine or a cottonwood. An oak tree would never win the pageant. But when you grow up here, the oak tree is like that unattractive aunt. She’s not much to look at, but she’s family. 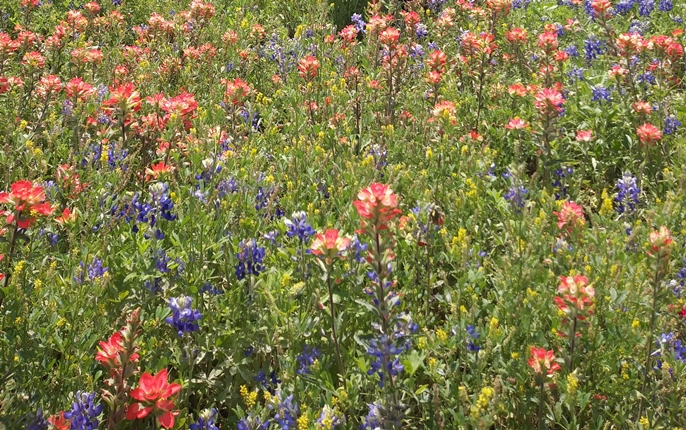 The song “Forever Young” comes on my shuffled MP3 player, just small enough to shove in my sweat shorts pocket. Our senior song. May the good Lord be with you down every road you roam and may sunshine and happiness surround you when you’re far from home. I’m about ten minutes from home, and sunshine definitely surrounds me. Past the school, the weeds that were waist-high two weeks ago are now shoulder-high, and I’m not a petite woman to start with. In my salad days, I was 5’7”. Now I’m 5’5”. Tell me life doesn’t literally beat you down. I may just be able to post those “short girl problems” memes in another decade.

A car passes by with the windows down, and cigarette smoke smacks me in the face, like I’m at a bar in 1997. I so rarely smell cigarette smoke these days, that it’s like a relic from the past. However, cigarette butts always litter the path I jog. So somebody is still ponying up $10 a pack for smokes and tossing them out the windows. I remember working at the local lakeside waterpark the first year of the millennium and the bar selling smokes for $5 a pack. It was outrageous! Who would pay it? Smokers did. And they will when it’s $20 a pack. Then again, some folks pay $6 for a cup of coffee that doesn’t even have free refills. Crazy talk.

Now I’m back at the glossy-leaved magnolia trees of my subdivision, venturing up the last long hill. “Eye of the Tiger” comes on, but I’m not having it. Neither Survivor’s nor Katy Perry’s version. All motivation is gone. Keep your eye, tiger. Not even Justin Timberlake’s “Can’t Stop The Feeling” could get me going at this point. The sun has won. Its energy has sapped my energy dry. It scoffs and tells me to run inside and take calcium supplements and drink lemon lime Gatorade and sit in the recliner and read the latest Magnolia Journal with the lovely and pregnant Joanna Gaines on the cover. Fine, sun! As you wish. Aaaaas. Youuuuu. Wiiiiiish.

13 thoughts on “Ramblings Of A Suburban Jogger”