It’s Riesling night with my friend, Lydia.  My husband is at a meeting, so Lydia and I are drinking wine and watching an American Pickers marathon.  Maybe we are odd because we don’t watch Real Housewives of Silicone Valley, but we prefer this History Channel gem.  I enjoy finding and preserving objects that have a history, and Lydia likes Mike.  That’s the bottom line.

Contrary to the rumor mill, Lydia and I never hear the beep of our gaydar go off on buddies Mike and Frank.  First off, their grammar is atrocious.  “Me and Frankie” this and “Me and Mikey” that.  Mike also refers to Frank as that “little fat, hairy dude.”  And what queen says things like “We’re kickin’ down that gravel road, man?'” That’s quite a leap from “Goodbye, yellow brick road.”  I believe this self-proclaimed Laurel and Hardy are just buddies from eighth grade.  I’m not going to get all black helicopter theory about them.

I understand Mike’s appeal.  He has a nice head of hair, he’s lean, and looks good in a v-neck tee and leather jacket.  He also has a wicked smile and seems genuinely giddy about certain big ticket items, although I wonder if he’s just jacked up on Red Bull.  Lydia is divorced and single, so she is allowed to fantasize about spending time in the back of that Antique Archaeology van with Mike.  Sometimes I even hear her say, “Lydia Wolfe” to herself, and that’s before the second glass.  I remind her Mike has a girlfriend, but hope springs eternal.

It’s that rugged appeal, the desire to find the treasure in the filth, no matter how dirty he gets.  “Down and dirty,” Lydia says, and her eyes light up.  I tell her Frank is descending into identical filth, but she waves that option away.  “Frank’s sweat is not the same caliber as Mike’s.”  Whatever that means.

Mike has a unique turn of phrase.  “It can be pretty sketch when you walk in someone’s door,” Mike says.  Other things are “killer.”  Is he from the Valley?  Do they have surfers in Iowa?  I also notice he peppers his speech with “Bam!” a la Cajun King Emeril Lagasse.

“Is any of this show real?” I counter.

And what about roller derby and burlesque star, Danielle?  Personally, I’m not crazy about how all that ink distracts from such a pretty face.  Yes, I realize I sound like a Golden Girl.  I’m also not keen on her sassy back talk to her employers (though I’m not naive enough to believe it’s not scripted).  Lydia says Danielle is not the least bit attractive, but let’s be honest.  She doesn’t like her because of her accessibility to Mike. 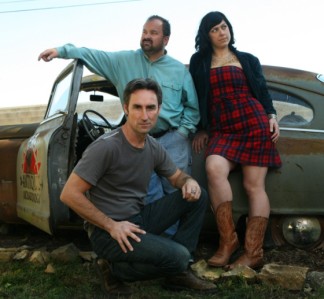 So we’re watching them making picks right and left, item after item, big and small.  We share a look that says, “No way that’s gonna fit in the van.”  No way they’re going to just pile up fragile antiques on top of each other, and I doubt they wrap everything in newspaper before tossing it in.  I’ve seen their brusque manner.  So the eternal question is: why do they drive such a small van if they KNOW there is a chance that they might find some huge items?  Especially if they’re hitting several places along the way, traveling through several states at a time?  Do the producers have someone driving a U-Haul behind them, tucked out of sight?

I read an article at voices.yahoo.com that alleges that the producers of the show visit the picks long before Mike and Frank show up, and they determine in advance not only what will be picked, but at what price.  Perhaps this is true, but that doesn’t discount the fact that there must have been times when the van did not offer enough room for what had been agreed upon.  Items like a tractor, Cushman scooters, eight foot oil signs, a grist mill stone–these take up a lot of real estate.

And what about all the times they are turned away? Or when Mike announces they’re “gonna do a little door knockin’, a little free-range pickin’?”  Is this fake as well?  Or do the producers allow them some liberties?  The goal of reality tv is to make people talk, right?  Maybe they gotta create the drama if they can’t find it.

The site http://www.westcoasttruth.com asserts that Frank and Mike don’t even travel together, that all the dialogue is filmed on set locations.  Lydia doesn’t care.  All she knows is that Mike just said he has “an economic stimulus package in his pocket,” which puts her over the edge.  Four glasses have given her the courage to declare she’s quitting her job tomorrow, buying a trailer, and going into the picking business (acrylic nails be damned!).  Her theory is that she may meet Mike at some pickers’ conference, as though that exists.  Talk about her grasp of reality.