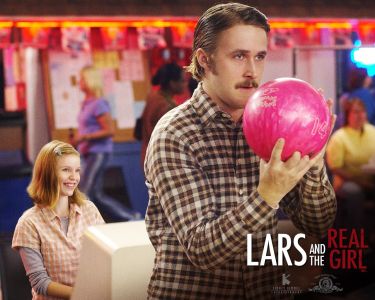 I don’t have an iPod, an iPad, a Kindle, a smart phone, any of that stuff.  I don’t want one.  I dislike phones except for emergency use, and I dislike emergencies even more.  My decade-old son, however, has strained both his neck and thumbs, becoming acquainted with his iPod, and has been asking Siri questions.  Today, he asked her what her favorite color is, and she said, “Well, I don’t know how to say it in your language.  It’s sort of greenish, but with more dimensions.”  Pardon?

Then he told her that he loved her.  She told him, “You are the wind beneath my wings.”  Excuse me?

I am reminded of Ryan Gosling in Lars and the Real Girl, in which he is enamored with a blow-up doll.  Will this generation (devoid of any social interaction skills) skip the deviant inflatable girlfriend phase and go straight into siri-love?  Will adolescent boys and young men spend hours alone with their iPods, constructing pretend relationships, using the app “ispeech” to make a woman’s voice say exactly what he types?  Isn’t that a new pathetic level of loneliness?  That’s worse than bowling alone.

Maybe there is nothing new under the sun:  Janis Ian predicted it decades ago.

The difference is–now the lover IS the phone.  Yeesh.